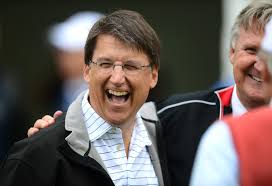 In massive release of email -- only took a lawsuit! -- McCrory's general counsel Bob Stephens is revealed to have agreed with some criticism of HB2 but admitted the truth about his boss: What good would it do to veto the law when the Berger-Moore General Assembly would immediately override the veto?

Translation: My boss is weak and ineffectual, but don't blame him for a terrible loss of business in North Carolina.

Posted by J.W. Williamson at 10/18/2016 10:35:00 AM
Email ThisBlogThis!Share to TwitterShare to FacebookShare to Pinterest
Labels: homophobia, Pat McCrory