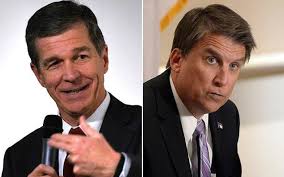 My own drinking game this evening: every time Pat McCrory claims he's stepped on toes on both the right and the left, take a snort.

Star power (and an index to how important the national media considers this race) ... Church Todd in the moderator's seat.

1-minute opening statements. McCrory, without his glasses, goes immediately to his crisis management skills with the floods down east. "Not my first crisis." Problem-solver.

Cooper opening: Thoughts and prayers for flood victims. McCrory has taken our state backward, and he's not being honest about his record. Whoa. Cooper on the attack right out of the gate. Heavy emphasis on school funding. HB2!

7:06:
1st question: Chuck Todd goes right to economic impact of HB2. How do you fix the state's reputation?

McCrory, immediately whining about the extremely liberal mayor of Charlotte, with help from the Attorney General (Roy Cooper, he's referring to you!) ... it's all their fault.

Cooper: House Bill 2 has to be repealed. We've lost jobs. McCrory continues to claim this isn't hurting our economy. Governor, what planet are you on? You've got to quit blaming it on other people.

McCrory: The Attorney General doesn't deny that he and the Mayor of Charlotte started this mess. (Did he say "this mess"?)

Cooper: Glad he's admitting it's a mess and an embarrassment to the state.

Question to Cooper: You declined to defend HB2. How can you pick and choose which laws you defend.

Cooper: I told the governor not to sign it because it writes discrimination into law. It has to stop.

McCrory: He's running a commercial against me! We've created 300,000 new jobs. His commercial is a lie. Let's get off the social issues. Let's get out of the bathroom.

Question to McCrory: Why was it okay for Raleigh to get involved in Charlotte politics?

McCrory: We had to stop government overreach. (Now, that's just too funny, considering the overreach in HB2!)

Cooper: McCrory is the one who's been all over national TV, talking about HB2.

Question: What bathroom can Kaitlin Jenner use in North Carolina? (zing!)

Cooper not answering that question.

McCrory: She can go anywhere she wants to in a private facility. If she goes to a public facility, she has to go to the men's shower. (Are you freaking kidding me?)

Cooper: Drilling in on HB2.

McCrory: Desperate to change the topic. Wants to claim that if Cooper were governor, we'd be deeper in debt.

Cooper: He promised a tax cut. He came through for the rich and for corporations. But he's raised taxes on middle-income citizens. If you go to a movie, you pay a tax, thanks to him.

McCrory: Returns to the "Carolina Comeback" as a trope. Yes or no, Mr. Cooper, are you going to raise taxes?

Cooper: We do not have to raise taxes to fix our economy.

Cooper: My mom was a public school teacher. The governor is not being honest about these figures. We're 44th in teacher pay. Try to find a teacher who's making $50,000 a year. You need to be straight with the people.

Cooper: When I was in the General Assembly, we moved teacher pay from 40-something in the nation to 20-something.

Question to McCrory: You say teacher pay is not enough. Why not do something about it now?

McCrory: Whining about the terrible, horrible economic situation he had to deal with coming into office.

Question to Cooper: Where do you get the money for more teacher pay?

Cooper: I helped pass through the disaster relief funds for Hurricane Floyd. We shouldn't be taking money out of that fund.

7:26: Question to McCrory about breaking his promise not to sign any more restrictions on abortions.

McCrory: Claims the laws he's signed didn't do a thing to restrict abortions. I was just protecting women's health. No challenges to our abortion laws. (Huh? Is he serious?)

Cooper: Distortion, misrepresentation of your record! He signed a law that put state government into the exam room with the woman and her doctor. He promised he wouldn't put more restrictions in place. He did. Now he's saying it wasn't a restriction.

McCrory: Why didn't you go scrub the floors in abortion clinics that were dirty?

BREAK. Lord, have mercy! This is the best debate of the season! Fast-moving and sharp.

Cooper: This is an issue about leadership ... identifying a problem and working to fix the problem. When I took office, we had a terrible backlog in rape kits. Turns to McCrory's poor administration of Charlotte's crime lab. I'm sure we'll hear him blame it on somebody else.

McCrory: The reason Charlotte had its own crime lab was because Cooper wasn't doing his job. (Cooper set him up for that one!)

Cooper: Another distortion. The Charlotte crime lab was started in 1969. (Oh, good come-back!)

Cooper: We met with McCrory's budget director every time before a legislative session to make our requests. The governor has not been doing his job getting resources.

McCrory: Cooper's head of SBI was a political hack.

McCrory: We're protecting the rights of criminals (yeah, right!). Politicians shouldn't be making the decision to release footage. It needs to be a judge. It's a perfect law.

Cooper: I'm mindful that there are communities out there that feel targeted. They want respect. Part of mutual respect is transparency.

McCrory: Typical Roy Cooper. After the law is passed, he finds fault with it.

Question to Cooper: Hillary Clinton said implicit bias is sometimes a problem with police. Do you agree with that?

McCrory: I think there's bias in all of us. I agree with Cooper: we need more police training. But to attack police officers, as Hillary has done, is bad.

Question to Cooper: What does Black Lives Matter mean to you?

Cooper: It's true. They do matter. And they often feel targeted. What they want is to be heard and to be respected.

McCrory: I was an admirer of Martin Luther King. All lives matter.

7:42:
National politics are impacting the state. To McCrory, why didn't you retract your support for Trump over the Access Hollywood tape?

McCrory: Trump needs to have his mouth washed out with soap. But so does Hillary Clinton. I'm voting for the candidate that best represents my viewpoint.

Cooper: It's hard to believe that he continues to support a candidate who has admitted to sexual assault. Governor, you've gone to Trump rallies and made jokes about HB2 on stage. McCrory and Trump are a lot alike.

McCrory:You had to make a choice to vote for Bill Clinton, didn't you?

Cooper: Trump is bad for this country.

Question to Cooper: Do you think Hillary is honest and trustworthy?

Cooper: More than Trump. She's not going to be a dangerous president, like Trump.

Question to McCrory: Is Trump a role-model for kids?

McCrory: Changes the subject to Syrian refugees. (You can run, Governor, but you cannot hide.)

7:47:
Question on Obamacare. There's only one major insurer in North Carolina offering Obamacare.

Cooper: The reason for that is Governor Cooper and his pals in the General Assembly, who have fought all vestiges of Obamacare. Brings up the failure to expand Medicaid. McCrory is putting the social issues ahead of the best policies for our state, once again.

McCrory: It's a first: I'm being blamed for Obamacare. I tried to get you to fight Obamacare with other states, but you wouldn't. If you feel so good about Obamacare, get on it and give up your state insurance.

Cooper: The governor will not accept the billions in federal money that we've already paid in and get it back for Medicaid.

McCrory: Admit Obamacare is a failure. Just admit it. It's okay to admit it.

Question to McCrory: Why won't you expand Medicaid.

McCrory: Because we don't know the costs. Whines about the Perdue administration's spending on Medicaid.

7:52:
Voter ID law was ruled unconstitutional. Do you regret signing the bill?

Cooper: The legislation was much broader than mere voter ID. It had to do with early voting and much more. It targeted black people and young people.

Not one question on coal ash. Thank you so much, Chuck Todd!

Closing statements, but my ears have quit listening.