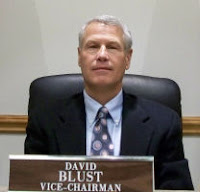 High Country Press put up videos of county commissioners David Blust and Perry Yates (and all the other commish candidates) responding to pablum questions about recreation and giving their pablum answers. As a witness said, "Yadda yadda yadda." But in the process, commissioners Blust and Yates managed to completely hide their records on the topic, and no one challenged them.

At a May 2013 commissioners meeting, Blust and Yates were the two votes against extending the Brookshire Park greenway under the New River bridge at Hwy 421. Those of us attending that meeting heard Mr. Blust diss greenway and trail projects as a potential money suck down the road. No surprise. Blust has always expressed disdain for maintaining the Brookshire greenway and the Rocky Knob bike park. So Blust and Yates voted "nay" on a procedural motion to go forward with an environmental assessment of the proposed greenway extension under Hwy 421. The Blust-Yates "no" votes would have killed the project in its infancy.

The minutes of that May commish meeting are here. Coverage of the vote didn't make the local press until June 10, in this paragraph at the end of an article titled "Vulnerable greenway projects may see reprieve":


Not everyone is as enthusiastic as others about the planned trail projects. County commissioners Perry Yates and David Blust last month voted against an environmental assessment contract for the 421 underpass. Blust expressed concerns about the future costs of maintaining the trail. The contract was approved by a 3-2 vote, however.

Another local citizen who witnessed the Blust/Yates "no" vote, and who has a vital interest in bike trails in our county, wrote me the following in an email:


Mr. Blust (and apparently Mr. Yates) seem to be concerned about the "future costs of maintaining the trail." I'd like to ask exactly what costs they are concerned about, and whether or not they consider trail maintenance money well spent, given the number of the public who make daily use of this infrastructure for recreation, wellness, and commuting? What maintenance costs scare them so? Mowing the borders? Occasional gravel backfill? This 'penny wise/pound foolish' approach to trails is difficult to understand given the over $47,000 spent on intervening in the ETJ lawsuit, which both men supported....

I ride a bike everywhere, so this stuff matters to me. When Blust in that meeting in 2013 said, 'I'm worried about saddling the taxpayers with maintenance of the trail' and voted 'Nay'-- it was one of the most monumentally stupid things I've ever witnessed.

To now witness Blust and Yates get away with appearing supportive of greenways and recreation in general, and not be called out on their past votes, is a little galling.

No, it's a LOT galling. And the pious 'support' these incumbents expressed at this event -- while receiving a complete PASS on their prior voting record -- should not go unchallenged. Someone should tell Dr. St. Clair and the 'High Country Recreation' interest group that they're not helping the cause of growing and supporting recreation infrastructure in our county with their "Forum," but only providing political cover for those who have a demonstrable record of voting against that cause.

Don't be taken in by the YouTube platitudes, folks. If you care about recreational infrastructure of all kinds, Mr. Blust and Mr. Yates are NOT your candidates. And they've got the voting record to prove it.

Blust and Yates voted to toss their county planner under the bus and industrialize the 421 Scenic Byway - Maymead has BIG plans for the gateway to the High Country! And they do not involve tourism.

Blust and Yates need to be voted out. Let the commission remain Republican and their move to industrialize the county will have no limits.