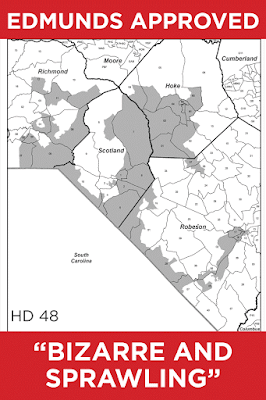 The dark shaded area in that map is North Carolina House District 48, which a panel of three federal judges last August singled out for special comment: "one of the most bizarre and sprawling districts" enacted by the NC General Assembly as part of their racial gerrymandering, now ruled unconstitutional. (In a bizarre twist, the three-judge panel left these gerrymandered districts in effect for the 2016 elections.)

He's being attacked in a 30-second TV ad for approving of racial gerrymandering, and Republican big-wigs in the state (GOP Exec. Dir. Dallas Woodhouse, NCGOP Chair Robin Hayes) are screaming bloody murder, that their Supreme Court Justice Edmunds is being unfairly "race-baited."

The TV ad spotlights US House District 12, not NC House District 48, but the point the ad is making seems amply justified in respect to any of the heavily gerrymandered districts enacted by the Republican General Assembly and which Republican justices on the NC Supremes find no fault with.