The Empty Suit Changes Its Shirt 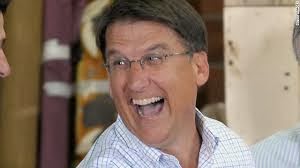 Gov. Pat McCrory did more boosterism yesterday at a press conference in which he used his cabinet secretaries as a cheering section. Oh, rest assured: everything's just hunky-dory, though he wants to raise teacher pay, he said, without also admitting that he never let out a public peep when the Republican-dominated General Assembly continued to grind our teachers into dust with last year's austerity budget.

Admission of reality is not Mr. McCrory's strong suit. Fantasies inspired by ideological boilerplate occupy his mind. So that he continues to claim that he's actually helping the poor by denying them health insurance. And helping the unemployed by cutting them off the meager funds that keep their families in groceries.

Failures at the Department of Health and Human Services? Those have nothing to do with management but with some vague analogy out of Wall Street finance: "Maybe DHHS is too big to succeed." Or, just maybe, the McCrory administration is genetically geared to coddle the rich, and the poor completely flummox them. Just to recap McCrory's DHHS as of approximately 4:16 p.m. yesterday:


Last week, a group of doctors sued DHHS and its contractors over problems with a new Medicaid claims system. Needy people have gone hungry because of problems with another state software program. The pile of unprocessed food stamp applications in the state led the federal government to threaten the state with financial sanctions last month. The state violated federal privacy laws of nearly 50,000 children when it sent their insurance cards to incorrect addresses last month.

Mr. McCrory's "Carolina Comeback," his fantasy sloganeering, hinges apparently on off-shore drilling and the fracking of the state's underground water supplies, both terrifically similar to this present governor: full of empty promise and fraught with all sorts of hidden dangers and a heightened threat of environmental suicide.

Instead of putting on a new starched PR shirt, this governor needed to take a long shower with some strong lye soap to wash that Pope stench off his agenda.
Posted by J.W. Williamson at 1/22/2014 09:57:00 AM
Email ThisBlogThis!Share to TwitterShare to FacebookShare to Pinterest
Labels: Aldona Wos, Art Pope, environmental issues, Pat McCrory, public education, unemployment in North Carolina

What's so tragic about the Tea Party boosterism of the very rich: NC is one of the poorest states in the country. It is a state filled with the very poor, those who "flummox" the powers that be.

I am relatively new to North Carolina; what I'm seeing here is unbelievably tragic.

Well, Jerry, you're certainly no innocent one to talk.

How about that strong Soros/ Alinsky scent on your own person?

Please give us a history of Soros and Alinsky. Why do you think just mentioning these two names means something? What are they guilty of? I don't think you have any idea of what Alinsky stood for.
George Soros funds whats called the Open Society believing we shoo;ld have informed citizen with real journalist.

We seek to strengthen the rule of law; respect for human rights, minorities, and a diversity of opinions; democratically elected governments; and a civil society that helps keep government power in check.

We help to shape public policies that assure greater fairness in political, legal, and economic systems and safeguard fundamental rights.

We build alliances across borders and continents on issues such as corruption and freedom of information.

Working in every part of the world, the Open Society Foundations place a high priority on protecting and improving the lives of people in marginalized communities.

Our Values
We believe in fundamental human rights, dignity, and the rule of law.

We believe in a society where all people are free to participate fully in civic, economic, and cultural life.

We believe in addressing inequalities that cut across multiple lines, including race, class, gender, sexual orientation, and citizenship.

We believe in holding those in power accountable for their actions and in increasing the power of historically excluded groups.

We believe in helping people and communities press for change on their own behalf.

We believe in responding quickly and flexibly to the most critical threats to open society.

We believe in taking on controversial issues and supporting bold, innovative solutions that address root causes and advance systemic change.

Thank you, LPOV, for proving my points.

Oh, yes, Alinsky has contributed to transforming America, as indicated by your statements. And the results have been very tragic and totally antithetical to America's glorious foundations.

Just wondering which of the values listed in the mission statement anonymous disagrees with?

You failed to say what Saul Alinsky was guilty of, was it working for Justice, Human rights, Fair wage for working Americans? Why are you opposed to justice and human rights?
Here's Saul Alinsky own words. http://blogs.chicagotribune.com/news_columnists_ezorn/2012/01/saul-alinsky-in-his-own-words.html

"And the results have been very tragic and totally antithetical to America's glorious foundations." Anonymous 11:28's comment would be laughable if this type of jingoistic thinking wasn't so destructive. Before pledging allegiance to those "glorious foundations," Anonymous, you need to actually study history. This country's foundations rest on the genocide of the Indians/Native Americans and hundreds of years of slavery both prior to the Declaration of Independence and after. If people like you would wake up, this "glorious" country might not start one horrible war after another, and our government might not be controlled by corporations, whose aims are the exact opposite of what this "glorious" country should actually stand for.