A North Carolina law regulating the humane treatment of dogs in our state's notorious "puppy mills" ... that was one of the few original things that Governor McCrory has advocated for, perhaps mainly because his wife Ann McCrory took up the cause.

Kinda sweet. Certainly innocuous enough. Pass a mamby-pamby law, and no one gets hurt.

The NC House passed House Bill 930 last year. Ann McCrory sat in the House gallery and watched, then held a press conference praising the action. But then nothing happened in the NC Senate.

Something just happened yesterday in the NC Senate with reference to H 930: Senate Rules Committee Chairman Tom Apodaca, in an apparent fit of pique, killed the bill in the Senate. Killed it dead. 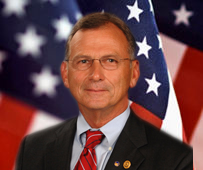 Trying to figure out why leads to one man, Republican Senator Bill Rabon, who represents Brunswick County and happens to be a veterinarian. He happens also to have a smutty mouth and coincidentally a tall impression of himself as a powerful politician, a dangerous combination.

A "profanity-laced recording" of Sen. Rabon surfaced yesterday at WRAL. Rabon was taped before a citizens' group saying in essence, "Over my mutha-effing body will that puppy mill law ever pass the Senate!"

Rabon said a good deal more in the recording:

1.  He said that Republican leaders in the Senate -- including, presumably, himself -- had already decided that the bill wouldn't even be taken up in the Senate in the "short session" this year. “That bill is not going to pass,” Rabon told the group. “Angels in heaven cannot make that bill pass."

2.  He used obscenity to refer to House members who passed H 930: “They [the House] are a bunch of [expletive]. They got political heat. They said, ‘We can no longer sit on this. We know the Senate will not pass it because it’s a piece of crap, so we’ll send it to them, and they’ll take the heat.’ Ladies and gentlemen, that is politics 101.”

3. The "political heat" Rabon says melted the House's resolve came from Ann McCrory and her little hubby, and Rabon expressed contempt for them too: "He claimed that Ann McCrory's advocacy, including a visit to the House chamber to watch the May 9 vote, was 'against all laws.' 'There is a strong line between opinion and lobbying,' Rabon said. 'When you pick up the phone and you are in a position of power and call individual legislators and offer advice or praise or this or that, you are, under the law, lobbying, and you must be a registered lobbyist in this state to do that.' ”

4. (Here's where it gets really interesting!) Rabon said the "puppy mill" law shouldn't pass because it's too weak ("It's too weak") and because it's too strong ("standards for humane treatment could too easily be interpreted by a judge to apply to livestock as well as pets").

5. The issue for Rabon appears to be money, especially money flowing out of pig farms, which are abundant in his part of the world: “animal husbandry in this state ... is an $80 billion industry – larger than the other top five industries in the state,” he said. “There is a LOT of money involved." For Republicans, it always comes down to the money, and Rabon evidently fears that H 930 might force factory farms to stop the brutality.

6. Rabon bragged about his own power. He bragged a lot:


He told the group he would introduce a stronger bill in the future, but he wouldn’t give a date or year.

”When I do it, it will be done at the right time, and it will pass,” he said. “I’m in the top five members in power in the Senate. The best shot you folks have ever had, you’re talking to."

Brunswick Sheriff John Ingram, who also attended the meeting, asked Rabon whether a stronger bill would be able to pass the House as well as the Senate.

Well, of course he meant to brag. But did Senator Apodaca kill the bill because Rabon pulled back the curtain on the Republican leadership? Is Apodaca embarrassed?

Posted by J.W. Williamson at 1/28/2014 09:20:00 AM
Email ThisBlogThis!Share to TwitterShare to FacebookShare to Pinterest
Labels: Bill Rabon, Pat McCrory

Also note this is Art Pope's show not the puppet Governor.

Can we teach this old dog any new tricks? Probably not. But Maybe we can teach him to go BYE BYE!

Rabon has become an embarrassment to ALL in the veterinary field, he should lose his license to practice and hopefully the good folks in Brunswick county will not vote him back ....

Rabon is an absolute disgrace to not only his profession but to his position as a State Senator. He in no way represents his constituents -- but only himself -- which is obvious by his self-centered comments. He refuses to be responsive to those who put him into office and has yet to ever expound on why the current bill is so "weak." My question is what has he done to fix it? -- Obviously nothing!! He should never be reelect -- no less continue in his current profession.

Can we help you pack your bags in November?

I don't care much for raban. But I have done some resurch on this bill and the reason that some people are against it is it has a lot of stuff in it that has nothing to do with "puppy mills" . One thing that has been pointed out to me is the part of the bill that regulates that transportation of animals. It says they have to be transported in a " climate controlled" vehicle. It doesn't say dogs or cats, it says animals. So a farmer transporting hogs or cows to be processed would no longer be able to use the very well ventilated trailers we see on the roads all the time. And if you think there not good enough well come ride with my families care. We don't have air conditioning ether. So if this is all about "puppy mills" than why is all this other stuff in it that has nothing to do with it? Strip out the the bs in it so farmers don't have to buy air conditioned trucks they can't afford and maybe we can have an honest debate on dealing with puppy mill.

I am an animal rights activist, your comments are exactly RIGHT. I have been aware of this despicable Senator for some time and his selfish, self centered views and greed. You will see a petition soon to present HB 930 to Congress and we need to make it clear to Rabon-- by signatures from his district mainly, although I'll take all the signatures I can get-- that he could be voted right out of office because of this. He seems to think he is some sort of God here and he needs to be taken down a few notches. Please tell everyone you know, MOST especially people in Brunswick county, Rabon's district. If people don't know, nothing can be done, so spread the word we want HB 930 to PASS and be presented to Congress as urgent. This bill isn't weak, this heartless Senator is scared HB 930 would include cruelty to farm animals, which, it should!!! Apparently ,treating farm animals as if they are living beings--which they ARE-- means less money in this evil man's already filled pockets

The good folks of Brunswick county need to KNOW, please pass the word!

I live in Brunswick County and I am sick about this "man" representing us. My vote will certainly not be for him the next time around. It is embarrassing to live in a state with no Puppy Mill legislation.