Oh Aren't You All Smug and Comfy Now! 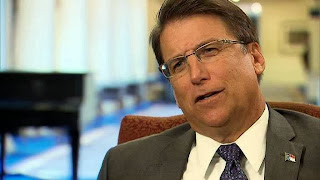 Governor McCrory, we're so delighted that you're well fed, well watered, well housed, and that you can rare back and make the claim that, until you arrived and saved us all from ourselves, people were moving to North Carolina just for the unemployment benefits. You actually said that, and you said it in a taped interview with Tom Campbell on NCSpin, so the evidence of your ... lie will live longer than the leather soles on the bottoms of your expensive loafers.

The folks at WRAL decided to check out the truth of that claim, since, you know, you've been known to speak untruths approximately every time you open your mouth.

WRAL asked The Guv's office where he got that information. Answer (I shit you not!): "The governor was referring to personal stories he’s heard." When pressed, The Guv's flack supplied three sources, none of them, when actually read, say one word about people changing states in order to get unemployment benefits.

WRAL also pointed out that in NC, the state that McCrory is allegedly governor of, "someone would have had to work in the state for around six of the last 15 months in order to be eligible for benefits," scarcely an incentive for pulling up stakes and quickly relocating here from, say, Brooklyn.

WRAL checked with experts who actually know stuff (and all comparisons to The Guv would be purely gratuitous): "Andrew Brod, an economist and researcher at the University of North Carolina at Greensboro, said that McCrory's claim 'defies reason.' " (We think -- again, gratuitously -- that we may have found the perfect epitaph for this governor: DEFIED REASON.

Posted by J.W. Williamson at 1/14/2014 11:35:00 AM
Email ThisBlogThis!Share to TwitterShare to FacebookShare to Pinterest
Labels: Pat McCrory, unemployment in North Carolina