An Inspiring Book About an Exhausting Battle 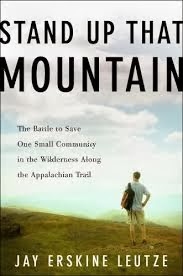 In 1999 Watauga County businessman Paul Brown got a 99-year lease on some acreage on Belview Mountain in Avery County and then obtained a permit to strip-mine it for granite, which he intended to turn into gravel on the site. Mr. Brown managed to get that permit, it turned out, without first notifying the neighbors that he intended to mine next door to them. Notification, followed by a public hearing, was required by the North Carolina Mining Law, which was flagrantly ignored in this case.

One of the near neighbors to that proposed mine was the Appalachian Trail, less than two miles away on Hump Mountain in the Roan Mountain Highlands.

Minding his own business at the time was another near neighbor, Jay Erskine Leutze, a drop-out from corporate culture who was living a quiet and simple life in a cabin his family had built when he was a child. Leutze got a phone call from a teenaged girl and her aunt, a tough mountain woman named Ollie, who lived directly below Mr. Brown's mine site and whose very lives were on the line. "Can you help us?" Turned out, Leutze could.

So began a citizens' fight against big money that went on for years and which Jay Leutze and "his Dog Town bunch" of regular mountain people won. It's an incredible story told by a natural-born story teller, which is what Jay Leutze is, in a book published by Scribner's in 2012: "Stand Up That Mountain: The Battle To Save One Small Community in the Wilderness Along the Appalachian Trail." Leutze writes with humor and insight, and he's especially good at drawing the portraits of the mountain people he teamed up with to win a monumental citizens' rights case.

Posted by J.W. Williamson at 1/18/2014 11:57:00 AM
Email ThisBlogThis!Share to TwitterShare to FacebookShare to Pinterest
Labels: environmental issues

That could never happen in Watauga County. I'm referring to the surreptitious granting of permits for destructive projects. Oh, wait. The Cottages. Never mind. With Joe Furman and Nathan Miller teaming up to protect the environment I'm sure nothing else bad can happen around here.