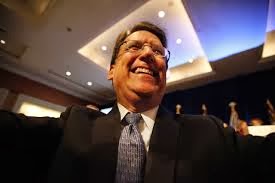 Gov. Pat McCrory has been doing what he apparently does best ... bragging about stuff he doesn't understand and/or had nothing to do with. He trotted out a new campaign meme -- "Carolina Comeback" -- in front of his best buds, a bunch of fat cats gathered together in a ballroom by the NC Bankers Assn.

Bankers? Did McCrory also have his hands full of a cigar and a 12-year-old brandy?

McCrory bragged that Art Pope's his economic policies had given a big tax break to everybody and that unemployment had dropped, as if on command.

The actual facts are a bit less rosy. The General Assembly’s own Fiscal Research staff showed the blindly ideological Republicans they work for that a married couple with two children that earns $20,000 a year will pay $262 more in taxes, once the “reform” McCrory is touting goes into effect. That's because the "tax break" was actually a "tax transfer." The rich pay less; the poor and middle class pay more in sales taxes at every turn.

Unemployment? UNC Chapel Hill Economics Professor Patrick Conway pointed out that the unemployment rate is down because the labor force has shrunk in the state some 2.5% in 2013.

Statistics, damn statistics, and lies. As Chris Fitzsimon wrote, "Workers who are no longer seeking employment are not eligible for unemployment benefits and they are not considered part of the labor force when calculating the state unemployment rate. Fewer workers looking for jobs means a lower unemployment rate even if no jobs have been created. McCrory is essentially boasting about an unemployment rate that is masking the state’s economic problems, not reflecting any successes in rebuilding the economy."

The bankers, incidentally, gave The Guv a standing ovation.

This state has been shredded by the NCGOP. It is a case study of Tea Party politics in action - and it's a disaster. They pushed through a tax transfer that benefits the wealthy and costs the poor more - sales tax on college meals (adding hundreds of dollars to student bills) - a significant drop in NC work participation, leaving the state with the lowest rate of participation in nearly four decades.

The Tea Party in North Carolina has also trashed education in the state; they've bashed teachers, rather than support them. They've arrested peaceful protestors. They voted to adopt a bill that allows guns in bars and they considered the adoption of a state religion. Clearly the only constitutional right they care about is the right to bear arms.

McCrory hails this as a success… as do the bankers. Predators are in danger of killing the host.

You need to be institutionalized. Go ahead and admit it, the Republicans are doing a great job.

To Anonymous @5:57 - sad little argument, to note that someone pointing out the flaws of this administration needs to be "institutionalized."

Facts matter. When the drop in unemployment is related to drop in workforce participation, the policy isn't working.

However, when the drop in unemployment is related to cutting entitlements such as the overly long unemployment benefits payoff for votes situation, the policy is working.