The WataugaConservative Defines the Brown Menace 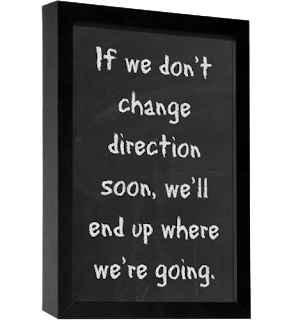 Blogger girds himself over at the WataugaConservative and tells us in no uncertain terms that he does not "romanticize the illegal aliens from Latin America" ... because he once lived there.

For the record, Mohamed Atta once lived here and did not end up romanticizing us. So much for the excuse of "I've lived there, so I know what I'm talking about." One takes one's biases across international borders as easily as carry-on luggage.

It's rare to see expressions of this kind uttered with such bland matter-of-factness -- moralistic and racial assessments of the "values" of others that have been weighed in the balance and found wanting. "Immigrants, illegal" (but not the legal variety too?) clearly don't measure up to the superior "values" of Mr. Blogger at Watauga Conservative.

The arrogance of that -- not to mention the chilling echoes of cultural superiority from, say, 1933 -- is fairly breathtaking. Show us your passport, indeed.

And then there's this:

"The bottom line is that in the past when aliens brought their values to this country, they came in such small waves, we could absorb them. Soon they learned what makes us prosper and they adopted our ways and language. This time they overwhelmed us so fast and stayed under the radar so long, that we can’t think of these illegal aliens the same as we did aliens in the past."

Mr. Blogger feels "overwhelmed" by something that he didn't notice until it was ... too late for self-protection? He's so unnerved that he can't think of "these" the same way. Which sorta begs a question.

This is cultural paranoia suitable for "Invasion of the Body Snatchers," the vastly superior original version from 1956.

Whatever it is, it's not something that I recognize as superior Americanism. Nor superior Christianity.

Wake up on the wrong side of the bed this morning?

I could see questioning whether the conservative author shouldn't be happy about immigration if he thinks it will bring "solidarity of family" and a cultural similarity with "rural people everywhere."

I could see explaining how Asian immigrants have pretty much put paid to the idea of "protestant work ethic" as social pinnacle.

But seriously..."echoes of 1933?" Godwin's Law rears its ugly head once again.

And what the heck is with the Mohamed Atta reference? I mean, yes, I get that the Official Narrative is now that tea partiers are terrorists and you're doing your part for the Liberal Echo Chamber. Fine.

Still, you do understand how absurd it is to assert that "Atta lived in America and didn't romanticize us, therefore people who live in a place can't claim to understand the people there." You do, don't you?

Basically it was this:

The conservative movement has a constant drum beat of blaming the weakest political group in our society, that being those here without legal status. The conservative movement has no problem getting unethical politicians from the right to echo the scapegoating, nor right wing extremist blogs like Watauga Conservative to pick the drum beat of fear, hate, scapegoating and bigotry. Fox news and AM radio's fear and hate programing continues to echo this hate, fear and scapegoating daily.

Now we here in Watauga County have church attending Christians calling for taking revenge on the children of maids, house painter, landscapers dishwashers blaming these hard working Christians for the economic problems caused by Washington's political failures, Wall Street's greed and American corporate CEOs decisions.
They call for refusing medical care at local hospitals and denying education to their children many of the children are American citizens.

Has the conservative movement damage American humanity so much they have degenerated to this?
This is the same kind of demonizing the Germans did in the 1930s and Rwanda political groups did just before the genocide.

This unethical scapegoating for political gain by the Republican party must stop.

The Republicans have no plans, no solutions to America's problems and no vision for the future, their only path to power is at the expense of those with no legal status. Other scapegoats are gays, unions, government employees, liberals, teacher but these have some politcal power to push back and are not as easy.

Where's the ethical voice of justice and compassion from local ministers or an out cry to stop?

I encourge others to express disapproval on the Watauga Conservative site.

Williamson, why did you not have the courage to address this on the Conservative? Is it because you can't censor that site like you do this one?

I don't expect you will have the courage to let this post through either, coward.

Demonizing and dehumanizing a group of people is the first step to more radical behaviors. I'm not saying it's going to happen here, but come on, you have to recognize that lots of people have thought "that could never happen here" - including many in Germany before the 1930s. Again, I'm not claiming that this is path the right is on in this country, but it's not as if we're immune to colossal moral failure in this country (let's see... forcible removal of American Indians, slavery, internment of Japanese Americans...)

So argue that we need to have an immigration policy that preserves some sort of integrity of our national borders - that I understand. Most countries exercise control over who can enter and claim citizenship; I don't actually think anyone is claiming we don't have that right as well. It's when people take what should be an argument about immigration policy and enforcement and turn it into a cultural manifesto about threats to what our country stands for that I have to step in and comment. And anyone who thinks we haven't been there before is ignorant of early 20th century history (as Maire says, "No Irish need apply" - google it). In fact, even with all the whining and moaning over immigration today, we still have not reached the levels of immigration of the late 1800s and early 1900s, when the percentage of foreign-born Americans reached almost 15% (in 2009 it was 12.5%)

And let's not neglect the biggest irony in the immigration debate: the time at which the largest percentage of Americans were foreign born was likely in the 18th century, as the country was being founded. Let's not forget the essential fact that unless you're Native American, your ancestors were immigrants too. And a lot of the Mexicans coming to this country illegally now are actually Native Americans themselves... taking the long view of history really puts things into perspective for me on this matter.

The Even Less Impressed Teahadist said...

Thanks Liberal POV, now I get it.

Step 1) Assert that all Republicans are hateful fearmongering scapegoaters--bastard crossbreeds of Goebbles and Ngeze, as you put it.

Step 2) Read something a Republican wrote.

Step 3) Since a Republican wrote it, it must by definition be fearmongering scapegoating, so you can work yourself into a lather making hyperbolic assertions about the author's intentions without the need for any actual evidence from the text.

Step 5) Sit back and enjoy the self-righteous glow from knowing that unlike Republicans, YOU would never stereotype people.

The states are apparently stepping up their efforts to control immigration as Obama has abandoned the federal government's role.

Anonymous said...
Williamson, why did you not have the courage to address this on the Conservative? Is it because you can't censor that site like you do this one?

I don't expect you will have the courage to let this post through either.

I second the challenge

The Even Less Impressed Teahadist

The conservative movement is blocking real reform with its hate, fear and scapegoating using Fox News, AM radio and right wing blogs as a constant drum beat of hate and bigotry against these house painters and hotel maids and their children.

Yes, this path has been taken many times by unethical politicians.

I repeat the conservative movement has the Republican party and America on a dangerous path.

Local ministers should find a backbone and speak for justice and compassion and against bigotry and revenge.

Lib, you are pathetic. You post the same thing to different blogs. At least you can say you have more courage then Williamson. Even if you do copy yourself.

I love it how one Anonymous says JW lacks courage because he didn't respond to the post on the original blog - then another Anon (maybe the same one?) assails Liberal POV for commenting in both places. Damned if you do and damned if you don't? Or maybe they think that comments are only valid if left on conservative blogs.

Or are you saying this doesn't matter because the post is not relative to either discussion? If so, I might have to agree,