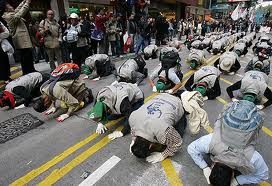 Mark Binker has uncovered the names of the 30 Republican members of the NC House (and the two Democrats, both members of the Five Goobers) who are off this week to attend the American Legislative Exchange Council (ALEC) conference in New Orleans.

What is ALEC? It's the secretive, Koch-funded clearinghouse for state legislation that -- surprise! -- helps immensely in the Billionaire's Coup that has taken our federal government and is taking, one by one, all the state governments. The photo voter ID bill, for just one example, emanated directly from ALEC and was introduced and pushed by Republicans in several state assemblies and most especially in ours.

The 30 Republicans going this week to eat steak and get their orders from The Matrix:

The two Democrats (both of whom played patty-cake with the Republicans in the veto overrides last month):

Among other contributions ALEC has evidently suggested to the new Republican majority in the General Assembly is the idea for gutting environmental regulations.

It is sad to read that Mr. Jordan will not be attending this educationalconference.

Seriously, kudos to Soucek and Jordan for not going. I don't agree with them much on policy but I respect that decision.

Come on...let's be honest with ourselves...Soucek and Jordan are not high enough on the ladder to receive an invite to this...It is for the puppets on the rung above them.

I'm sure they'll be there next time after being re-elected in the gerrymandered safe districts.