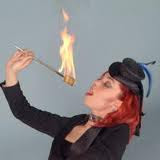 An item in "Under the Dome" caught our eye. Bob Harris, an apparatchik of the old Jesse Helms machine and evidently an acolyte of "Freedom for Light Bulbs But Not for Women" Michele Bachmann, has founded an "independent campaign expenditure" fund to preemptively bash the dickens out of Texas Gov. (and HUGE JESUS-LOVER) Rick Perry (or "Parry").

His org is called "Keep Conservatives United," and he sez he intends to display Perry (or "Parry") in the political nude, so to speak, so you fans of Perry/Parry in the audience may want to wear your 3-D glasses.

Everyone in the Ames, Iowa, debate last night seemed just as pleased as fishhouse punch to have Rick coming in to the race, especially Ron Paul who opined that the more establishment candidates, the better for him, though we doubt he needs any more contrast to stand out substantially from the wallpaper (a.k.a., Mitt Romney).

Speaking of Romney, his grin-and-bear-it indulgence of the tantrums being thrown on every side of him last night strikes us as the thinnest of disguises. But we are glad to have him on the record from the Iowa State Fair: "Corporations are people, bitches, so suck it!"

Watching the Republician debate late night reminded one of the story how the Captain of the Titanic called a Crew meeting and wanted to know who made the loud noise on the Portside and why the ice machine was casting ice on the foredeck...

If Corporations are not made up of people, what are they made of? Droids? Soylent Green? Holograms ?

G.I.G., but it's only those who run or own the corporations who see the real money; the people who actually do the work find themselves working longer and harder to make up for their downsized coworkers, all the while taking pay freezes/cuts and fewer benefits as their thanks. The successful and wealthy businessman, Mr Romney, seems to have forgotten that. Voters -- those same people who make up the corporations -- will not.

Trying to convince Liberals that corporations are nothing but organized groups of humans pooling their resources and talents is useless.

Understanding your argument would require actual thought, not bumper sticker sloganeering. They know that corporations are EEEEEEvil, and that's all they want to know.

It's a false argument in any case. The fact is, it's the customer of the corporation that pays corporate income taxes. And, if you are a purchaser of any goods or services provided by a corporation, then you are the one paying the taxes.

I oppose high corporate tax rates for reasons having to do with the competitiveness of the US in a global market place. But, as far as taxing the "haves", that just isn't the case. The result is that it's the consumer who is paying the taxes!