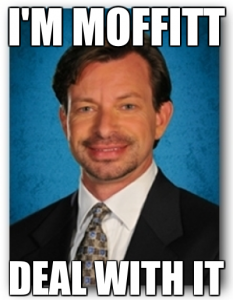 Mecklenburg and Guildford are not the only counties that the new Republican majority in the NC General Assembly decided to micromanage to their benefit.

Buncombe County Republican representative Tim Moffitt has managed to impose his will on the voters by manipulating a "local bill" through the General Assembly that he thinks will give him a Republican majority on the Buncombe County Commission ... just like in the Mecklenburg and the Guildford County cases.

The Voice of Institutional Teahadism said...

Like any good Teahadist, I dislike larger governments telling smaller governments what to do, and I don't think Moffit's way was the right way.

But try to take off your partisan blinders and think about this. Allowing each voter to vote on each seat means that a 60% majority can always secure 100% of the seats and completely deny a 40% minority any voice. Sure enough, in 2010 Buncombe had a 60/40 split, but that 40% minority doesn't have a single representative on the current commission. Yea, democracy, huh?

This cuts both ways. Imagine being a Democrat in Wyoming and knowing you've never sent a Democrat to Washington since Dick Cheney won in 1977.

This is also why the VRA calls on states to create minority-majority districts--because otherwise the minority's voice might be permanently silenced. If you're not comfortable with the VRA analogy, this is why many European countries and Japan use proportional representation--so a minority can reliably secure a voice.

In America's federal system, the institutional logic of Moffit's bill is the same as the VRA. If a local government denies a large minority a voice in politics, that minority takes its case to its allies in a more powerful government, asking them to force the local government to give them a voice.

This doesn't mean we should applaud Moffit, but it does mean you should try to think a little deeper before tossing off superficial rhetoric like the OP.

I'm sure if this was a Democrat pulling the same trick we would have quite a few Teahadist heads exploding...I doubt you would be so understanding.

Good post Voice. I agree...state should not have gotten involved unless they are going to pass a state wide mandate.

It does make sense for each district to elect it's own represntative (for the reasons you stated). The county wide vote would be similar to a state wide vote for our state senators.