Champion Hypocrite of the Day 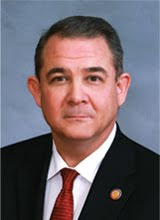 Republican state Rep. Stephen LaRoque, who represents Kinston in the General Assembly and who is a BIG hater of the federal government and the waste of taxpayer's money, is himself slopping at the federal trough.

Chris Fitzsimon has the story:

He’s earned up to $195,000 a year heading the two small economic development organizations—the East Carolina Development Company and Piedmont Development Company—and used the non-profits to loan some of the public funds to his close associates and political allies.

Past board members say they were kept in the dark about his pay. “I was not aware that he was compensated at all,” said CeCe Hudson, a former board member from Sampson County. “I don’t think there’s anything wrong with being compensated fairly, but there’s a line.”

LaRoque, now in a leadership position at the N.C. General Assembly, refused to answer questions about the management of his non-profits.

Posted by J.W. Williamson at 8/03/2011 10:45:00 AM
Email ThisBlogThis!Share to TwitterShare to FacebookShare to Pinterest
Labels: Chris Fitzsimon, Stephen LaRoque