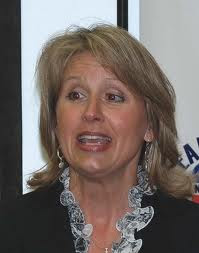 North Carolina Congresswoman Renee Ellmers has taken a page from Virginia Foxx's "Big Book of How To Avoid Facing the Voters" (Chapter 1: Don't Face the Voters) and one-upped it in a profitable way.

According to Politico, Ellmers, along with several of her now rather nervous conservative fellow Republicans in the U.S. House, are holding "pay-per-view" townhalls in order to limit admission to those true believers who have the money to squander on hearing the talking points of the day.

We're really shocked that Madam Foxx hasn't thought of this. (Foxx has stuck to the other main way to avoid confrontations: the fake "tele-townhall," where you have to call in, get screened, and maybe -- as in never -- get to pose a question.)

Ellmers has no -- as in NONE -- open townhall meetings scheduled in August during the Congressional recess. But you can pay $13 to attend a Fayetteville gathering to hear her blather on from the approved script. There is NO provision that we know of for people to come without paying the $13.

Natch! This is just carrying "privatization" to its logical conclusion and making it quite clear that you can, in this Republic, buy your congresswoman. You get what you pay for, and that ain't much.

Posted by J.W. Williamson at 8/22/2011 08:58:00 AM
Email ThisBlogThis!Share to TwitterShare to FacebookShare to Pinterest
Labels: Renee Ellmers, Virginia Foxx

I live in Ellmers district and she is running scared. She was blasted when she tried open townhalls the last time there was a Congressional break because she supported and voted for the Ryan budget. She was not prepared for that at all. She tried limiting the number of questions but that didn't work either so she went to giving a long lecture on why the Ryan budget would work and then leaving abruptly when finished. So, am so not surprised she is resorting to the pay per view version, now. Great. Another Virginia Foxx. Just what this state needs.