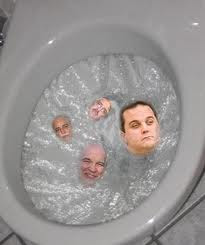 The closing of the Broyhill Inn and the loss of jobs there is only the tip of a big Republican iceberg.

Although the local school system managed to survive major job losses, because the county commissioners caved on additional funding (after they totally botched the quarter-cent sales tax increase), Appalachian State University is going to take it in the neck.

And who's going to lose those jobs? Support staff, mainly, the people who can least afford it.

And how many of them voted for Dan Soucek and Jonathan Jordan because they were served a big, steaming cup of tea and thought it would taste good?

Thom Tillis, the Republican Speaker of the NC House, campaigned on the main issue of "jobs, jobs, jobs." Too late we find out he meant "fewer jobs, lower-paying jobs, no jobs." One major state analyst, the NC Budget & Tax Center, is forecasting tens of thousands of new unemployed as a direct -- direct -- result of $4.6 billion in cuts in education, health care, public safety, and other services wrought by the wrongheadedness of the new Republican majority in the NC General Assembly.

From the relevant blog:

Mr. Tillis is a pro establishment, status quot politician. For example, he is using the same tactic that his predecessor Debra Ross did to try to defeat the HB111 (concealed carry in parks and restaurants) by keeping it bottled up in committee.

He also tried to gut the Castle Doctrine. We need a Tea Party candidate to run against him in the primary.

JW,
Has anyone ever told you the State of NC is broke? Time change and the need for the Inn no longer exsist. If the Inn had been run like a business, it would have closed several years back.

Government is never "broke" in the eyes of the liberals. Not as long as a single taxpayer has a dollar left in his pockets!

24T - really? You think liberals really want to tax everyone until they have have no money left? I realize you were using hyperbole here but it's hard to have a serious dialogue when you make statements like that. I'd call myself a moderate liberal and I'm for tax reform - closing loopholes, eliminating many deductions - and yes, higher rates on very high incomes. You and I may disagree about that last one but I think you'd find "liberals" are more open-minded and more diverse than you imagine.

I do not think liberals are open minded at all. Empty headed, maybe, but not open minded. All they have are the talking points they have been taught. The censorship on this blog proves that they are afraid of debate.

Not Really...I was making a sarcastic point, as I am sure you know. It was in response to the post above mine in which someone pointed out to JW that we are broke.

Conservatives think the answer to going into deeper and deeper debt is to reduce spending. JW..who is apparently arguing against the budget as cut to meet our balanced budget requirements...seems opposed to the cuts.

Thus, my point...liberals seem to be arguing that we can just "tax the rich" more and all of our problems are solved. How about let's all share the tax burden? You want to raise taxes? Raise them the same for everyone. Why should half of our population not contribute to their government?

Speaking of hyperbole....where did JW get the figure of $4.6 BILLION in budget cuts?
The Republicans claim that they cut from what Governor Perdue proposed by $200 Million. The Dems are saying it was $600 Million...

But now, 4.6 billion in CUTS? Cuts from what? certainly not from the Perdue budget.

BTW, it's difficult to discuss these matters here when JW only posts some of the responses to the liberal positions. I realize it's his sight and his rules, Im just saying that all the arguments aren't being posted.

I agree that JW engages in quite a bit of hyperbole as well - and that many on the left discount views on the right rather than looking for common ground. I tend to agree with more liberal points of view but I'm open to good ideas not matter where they come from.

I'm on the fence about moderating comments. Part of me thinks it's not entirely fair, but then again I've visited the Watauga Conservative blog and was totally overwhelmed by all the long and often rambling comments on there. It felt like 2 or 3 people just posted over and over and totally dominated the conversation, like it was pointless to try to say anything because it would just be lost between the rants.

Anon,
There was a $4.6 billion shortfall in this year's budget compared to last. If you use reading comprehension (which you apparently did not) you will notice that JW was correct in his post. Also, it was great reading your liberal post! Good thing JW keeps those dirty Repubs' posts from the site!

Do you know what a "budget shortfall" is? Apparently not.

Maybe it's your reading comprehension that's the problem.