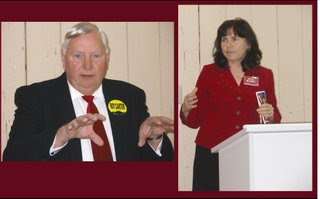 Fifth District congressional candidates Roy Carter and Diane Hamby appeared today side by side at the local Democratic Women’s Club luncheon, spoke about their campaigns (for the privilege of taking on Virginia Foxx this fall), and answered questions from a max-capacity crowd at the Broyhill Inn. Carter and Hamby will face one another in the May 6th Democratic primary.

They were cordial to one another, pledged to support the eventual nominee, whoever that turns out to be, and elicited laughs and good-natured groans as they focused their comments on the last seven years generally and on the performance of our incumbent congresswoman specifically.

“I’m absolutely positive that Virginia Foxx’s broom was made in China,” said Hamby, in one of the bigger laugh lines of the day.

Roy Carter said he officially announced his campaign last Labor Day for a reason: he comes from a laboring background, and Virginia Foxx has rarely supported legislation that helps laboring people. Plus she’s voted against every program that would help the children of laboring and poor people, including proposed expansions of Head Start and S-CHIP insurance.

Both Hamby and Carter put emphasis on the costs of health-care and the crisis of uninsured Americans in today’s economy. “Too many people are one health-care crisis away from financial ruin,” said Hamby, and Carter said that many years ago the death of his teenaged brother had “broken my family, because we didn’t have insurance.” This country has got to do better, and CAN do better, both candidates agreed.

They also agreed that Congresswoman Foxx has turned her back on Watauga County, which did not support her in the election of 2006. “While cheerleading for the tax breaks for the richest two percent of Americans, Foxx votes against every program that could help 5th District citizens, including veteran services for members of our armed forces,” Carter said.

Hamby agreed that the big issues are all “pocket-book” issues, from the prices of gasoline and food to the loss of jobs.

Carter came out in favor of protecting the Globe area below Blowing Rock from the Forest Service plan to sell off the timber on hundreds of acres to private interests. “That’s another thing Virginia Foxx has turned her back on,” said Carter.
Posted by J.W. Williamson at 3/26/2008 05:52:00 PM
Email ThisBlogThis!Share to TwitterShare to FacebookShare to Pinterest