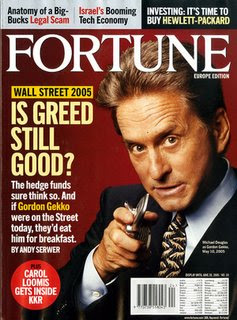 Back several years ago ... maybe as far back as a decade ... BB&T titan John Allison tried to give ASU a bunch of money to found a Center for the Advancement of American Capitalism. The ASU Chancellor at the time actually accepted the money, but then the faculty senate got wind of what was happening and began to look into what Allison was all about.

Turns out he was all about Ayn Rand, the Russian-born American novelist and philosopher who wrote "The Fountainhead" and "Atlas Shrugged." Rand developed a philosophy about capitalism that she called "objectivism." She despised any element of society that tended toward socialism ... that is, any feint by society toward trying to help the weak. Self-sacrifice would, over time, destroy any nation, she wrote. Greed is good; religion ain't. The needs of others should never be put ahead of Self, she said.

The faculty at ASU did not much cotton to the notion of an academic "center" on its campus dedicated to advancing this philosophy of objectivism. Clearly, its objective would have been indoctrination, not investigation.

However many years later, John Allison has finally found his university patsy, Marshall University up in Huntington, W.Va. Allison's BB&T Charitable Foundation has given Marshall $1 million to establish the BB&T Center for the Advancement of blah blah blah. The grant specifies that a certain specific book must be required reading for all students: "Atlas Shrugged" by Ayn Rand.

Not that we have anything specific against torturing post-teens with great fat unreadable tomes, but it just goes to show you that not all the whores in this world work for The Emperor's Club. Some of them will be teaching at the BB&T Center for the Advancement of yadda yadda yadda.
Posted by J.W. Williamson at 3/12/2008 12:07:00 PM
Email ThisBlogThis!Share to TwitterShare to FacebookShare to Pinterest