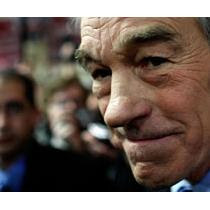 James Kirchik in The New Republic rips the mask off this ugly mug and finds an even uglier one:

"[W]hoever actually wrote them, the newsletters I saw all had one thing in common: They were published under a banner containing [Ron] Paul's name, and the articles (except for one special edition of a newsletter that contained the byline of another writer) seem designed to create the impression that they were written by him -- and reflected his views. What they reveal are decades worth of obsession with conspiracies, sympathy for the right-wing militia movement, and deeply held bigotry against blacks, Jews, and gays. In short, they suggest that Ron Paul is not the plain-speaking antiwar activist his supporters believe they are backing -- but rather a member in good standing of some of the oldest and ugliest traditions in American politics."

Ron Paul eats crow about it on his own website:

"When I was out of Congress and practicing medicine full-time, a newsletter was published under my name that I did not edit. Several writers contributed to the product. For over a decade, I have publicly taken moral responsibility for not paying closer attention to what went out under my name."

But seems like, for over a decade, he must have approved of what went out under his name, which makes his non-denial denial just plain lame.

If anybody fully rational thought this guy had a chance in hell of getting anywhere in these presidential primaries, there would be a good deal more attention to these writings, these sentiments, these rejections of the American melting pot.
Posted by J.W. Williamson at 1/09/2008 03:45:00 PM
Email ThisBlogThis!Share to TwitterShare to FacebookShare to Pinterest