McCrory Decides To Be a Loser 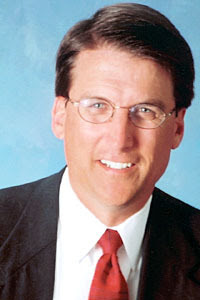 Pat McCrory, the Republican tax-and-spend Mayor of Charlotte, finally made it official today: he's running for governor in an already crowded field.

If he could make it through the Republican primary, he'd be a credible threat to either Bev Perdue or Richard Moore. But he can't win the primary. No, probably not.

Everyone was waiting to see if he would attempt to remake himself as an arch conservative today, sort of like Mitt Romney tried to do on the national scene, but apparently McCrory didn't take that bait. Tom Jensen has one take on the "messaging" contained in McCrory's announcement, and we don't see one word about illegal immigration or cutting corporate taxes. Even more symbolically telling was the presence of ex-Gov. and ex-Boone resident Jim Holshouser, who introduced McCrory. Holshouser was the last moderate Republican to occupy the governor's mansion.

It will take another moderate to get there again. But how is McCrory gonna do it when he's got this sort of opinion rife among Republican Party regulars? And his chief rival for the Republican nomination, state Senator Fred Smith, will begin to unload on him as a notorious Charlotte "liberal." Mark our words.

We asked one of the best Democratic political analysts whether we shouldn't be worried about McCrory. "Naw, the Republicans down east will never go for him," came the answer. No, but maybe he'll elevate the debate a little bit above the usual red-meat talking-points (God, gays, and guns) so popular among Republican Y-chromosome holders.
Posted by J.W. Williamson at 1/15/2008 03:15:00 PM
Email ThisBlogThis!Share to TwitterShare to FacebookShare to Pinterest