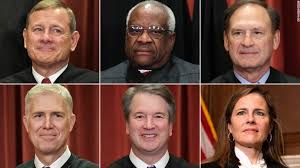 The conservative super-majority on the US Supreme Court has already signaled that they'll be only too happy to take up next term the novel and radical theory that state courts have no right to overturn state legislatures (the ones dominated by Republican majorities, natch!) in the drawing of congressional districts. The case will come from North Carolina -- Moore v. Harper.

See, last March the North Carolina Supreme Court threw out BergerMoore's new congressional maps, which would likely have produced a 10-4 Republican dominance of the state's congressional delegation, saying the maps violated the state's constitutional promise of free and fair elections. BergerMoore appealed to the US Supremes, arguing an extremist version of state's rights, "the independent state legislature doctrine," which maintains that no state court can interfere in a state legislature's desire to seize partisan power and hold it by gerrymandering and other means. But at that time, and without explanation, the Supreme Court refused to reinstate BergerMoore's maps and allowed the election to proceed with new, slightly less horrendous maps for Democrats.

The independent state legislature "doctrine" originates (favorite word among extremist judges) from the U.S. Constitution’s election clause, which says that the “Times, Places and Manner of holding Elections for Senators and Representatives, shall be prescribed in each State by the Legislature thereof.” That last clause has previously been interpreted to mean "by the legislative process," which would include voter petition initiatives to establish independent redistricting commissions, for example, and suits in state courts. The independent state legislature doctrine could also give lawmakers control over issues such as voter qualification, voting by mail, and other election procedures, effectively taking voting procedures out of the hands of the State Board of Elections and giving them to BergerMoore.
Last March, even while the Court as a whole was rejecting the appeal to overturn the NC Supremes, justices Thomas, Alito, and Gorsuch dissented and said they thought the theory advanced by BergerMoore was probably correct and that they were eager to consider such a challenge going forward. Kavanaugh expressed interest too but said it was too close to the May primaries to intervene.
Now with Amy Coney Barrett on the Court, the conservatives have already announced that they'll be hearing Moore v. Harper when the new term begins in October. If you don't think there'll be a radical outcome for North Carolina elections -- and for other states as well -- you haven't been paying attention.
Posted by J.W. Williamson at 7/01/2022 06:37:00 AM
Email ThisBlogThis!Share to TwitterShare to FacebookShare to Pinterest
Labels: N.C. Supreme Court, Phil Berger, redistricting, Tim Moore, U.S. Supreme Court, voting rights