Reason for my Endorsement: I believe it’s fair to say that if Allen beats Ervin and joins his rabidly conservative mentor Paul Newby on the court, then we’ll probably never see any unconstitutional action by the Republicans in the General Assembly overturned. While I wish there was a progressive alternative to Ervin, abortion rights, book banning, gerrymandering and voter rights are on the line and  half a loaf is better than no loaf at all. 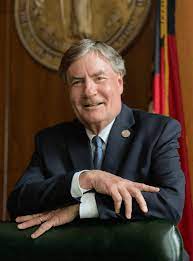 Some Democrats are conditioned to expect Judge Ervin to be a “swing” vote on the state’s high court, meaning in my book, that he can’t be counted on to issue progressive conclusions of law. I am one of those Democrats, and I wish there was a progressive alternative to Ervin.

As an example, in one recent case, PHG Asheville, LLC, v. City of Asheville, Ervin wrote the majority opinion that Asheville had improperly denied a developer’s application for a conditional use permit to build a hotel in downtown Asheville because “no competent, material, and substantial evidence was presented in opposition.” Which is blatantly false. As the excellent (and always progressive)  Anita Earls painstaking walks through in her dissent, Ervin willingly ignored it.

In some cases, however, Ervin has hung resolutely with the 4-member Democratic majority on such landmark issues as the unconstitutional gerrymandering of legislative seats for the General Assembly. In August, he was the fourth vote for a decision that said the state constitution can’t be amended by lawmakers if they come from districts with borders created in a racially-gerrymandered way.

The NAACP v. Moore case was filed in November 2018 in an attempt to invalidate two constitutional amendments: one requiring a photo ID to vote and one capping the state’s income tax rate. With its new opinion, the North Carolina Supreme Court said that members of the assembly coming from districts with unconstitutional racial gerrymandering could not propose amendments to the state constitution. 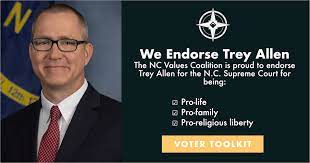 ​Allen began his legal career as a judge advocate in the United States Marine Corps. He spent most of his time in the USMC overseas, and his military service included a deployment to Iraq during Operation Iraqi Freedom. As a judge advocate, he advised commanding generals and subordinate commanders on military justice and operational law matters, prosecuted violations of the Uniform Code of Military Justice, and helped fellow Marines resolve personal legal issues.

​After being honorably discharged, Allen completed a clerkship with Justice (now Chief Justice) Paul Newby of the NC Supreme Court. Following Newby’s installation as Chief Justice in January 2021, Allen was appointed General Counsel for the NC Administrative Office of the Courts.

Paul Newby is a bad cat and has wholeheartedly endorsed Constitutional conservative Allen.