"Signature Matching" on Absentee Ballots in NC Shut Down By Court 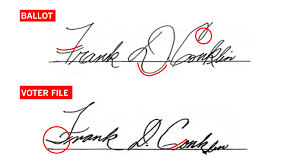 Back in the summer, the NCGOP put in a formal request to the State Board of Elections (SBE) to force county boards to match signatures on absentee ballots to voter registration forms. The SBE said no, that North Carolina already has “an extraordinarily secure absentee ballot process” and that adding signature matching “would introduce a level of uncertainty where some voters might be treated different than other voters.” North Carolina law already requires absentee ballots be filled out in the presence of two witnesses or a notary, more stringent identification requirements than in most states.

In other words, "signature matching" is just another version of voter suppression.

The NCGOP sued in Wake Superior Court to overturn the SBE's decision.

Last Friday, Judge Stephen R. Futrell dismissed the suit. There will be no signature matching on absentee mail ballots in North Carolina.

Posted by J.W. Williamson at 10/11/2022 07:03:00 AM
Email ThisBlogThis!Share to TwitterShare to FacebookShare to Pinterest
Labels: North Carolina Board of Elections, North Carolina Republican Party, voter suppression

Correction: The lawsuit was not dismissed. The request for a temporary restraining order, prohibiting the ruling of the State Board of Elections, was denied.