From PamsPicks, her next-to-last write-up of the all important, statewide Court of Appeals races. Republicans always have 10 of the 15 seats on this Court. Tyson is an incumbent. 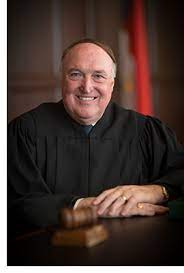 Tyson was first elected to a seat on the Court of Appeals in 2000, was not reelected in 2008 but came back to win again in 2014 and is now running for reelection. He earned his bachelor’s degree from UNC-Wilmington in 1974 and his law degree from Campbell in 1979.

Tyson seems to be something of a volcanic conservative.

On May 7th, 2021, during a Black Lives Matter protest around the Market House in downtown Fayetteville, Tyson was alleged to have circled protestors and then on the second pass attempted to hit one of them with his SUV. The vehicle ended up on the sidewalk. The woman who appeared to be targeted filed charges against Tyson with the Fayetteville police, and a detective was assigned to investigate. Allegedly, the whole incident was captured on city videotape. Subsequently, Tyson was charged with misdemeanor assault with a deadly weapon. The charge was eventually dropped for lack of evidence.

Tyson is endorsed by, among other conservatives, the North Carolina Fraternal Order of Police, the NC Homebuilders PAC, the NC Right to Life PAC, the NC Values Coalition, U.S. Congressman Patrick McHenry, and former Trump chief of staff Mark Meadows. Adams was brought up in the tobacco fields of Warren County by a single mother of four. She is a graduate of UNC-Chapel Hill (English and Economics) and NC Central University School of Law. She served as a JAG officer for the US Navy and as both a prosecutor and a Federal public defender in eastern North Carolina. She was elected in 2012 as a Superior Court judge in Cumberland County and has continued to serve on that bench until the present.

Past experiences include representing defendants who were charged with various criminal and military offenses; providing legal advice to service members, and prosecuting violent and property crimes, drug offenses, and child abuse.

Judge Adams spoke out against a Republican scheme to redistrict judicial districts to give Republicans an advantage in elections. Republican Rep. Justin Burr, a bail bondsman from Stanly County who was apparently reacting to the continued trouble the Republican majority was experiencing in court over unconstitutional laws, made a proposal to disband the Courts Commission and turn its advisory duties over to a legislative committee. “What is the rush?” Judge Gale Adams said at the time, relaying a message from the president of the North Carolina Conference of Superior Court Judges. “Why can’t the legislators simply take time to more fully and thoroughly study the issue about judicial redistricting? This is a critical issue that affects a large number of people, the citizens of our state, and so what is the rush? Why can’t we have a nonpartisan, impartial commission and study the impact that it has?”

Adams’ endorsements include the NC AFL-CIO, the National Association of Social Workers, and the Sierra Club.