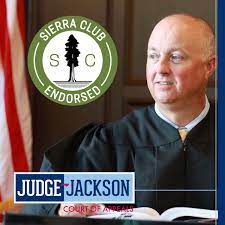 Jackson is running for a full 8-year term on the court after being appointed to this vacant seat in December of 2020. He’s a native of eastern Wake County. He rose to prominence in the NC House, where he was first elected to a Wake County seat in 2008 and was elevated to House Minority Leader in 2016. He was serving as Minority Leader when Gov. Cooper appointed him to the court.

Jackson earned his B.A. in political science from UNC-Chapel Hill in 1993 and got his law degree from Duke University and passed the bar in 1996. Jackson practiced law in Zebulon with Gay & Stroud. When Donna Stroud left to serve on the bench in 2004, the firm became Gay & Jackson. His small-town general practice focused on residential real estate and civil litigation.

After the disappointing performance of NC House Democratic candidates in the 2020 elections, Jackson announced that he would not be seeking to return to his minority leadership post: “I do take responsibility, of course, for us not picking up seats,” he said. “We’ve got a lot of leaders in our caucus, and it’s time to give somebody else a chance.” 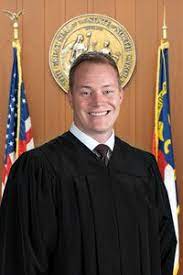 Stading is a former Mecklenburg County prosecutor and currently a district court judge. He served as a JAG officer for the Air Force and is still in the Air Force Reserve. He earned his degree from Campbell University Law School.

Stading has raised record amounts of money for a judgeship candidate, and he’s not been cautious about campaigning with Republican Senate candidate Ted Budd. Indeed, he’s been endorsed by some of the most conservative voices in the NCGOP, including jerk Congressman Dan Bishop and loose cannon Lt. Gov. Mark Robinson.

Stading says he’s “proud to be running for the Court of Appeals alongside #TheRightJudges,” and blows a consistent dog whistle of “uphold the Constitution, defend law & order, and protect American values.”