Reason for my Non-Endorsement: I don’t endorse Democratic candidates who cast votes in favor of abortion restrictions and who seek to dictate who uses which bathroom. And I don’t endorse Republicans who receive endorsements from anti-abortion groups and cite Antonin Scalia as their judicial hero. 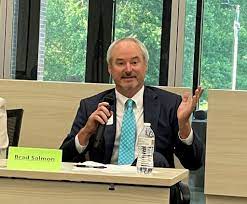 Salmon is a founding partner at the Salmon Law Firm “where he focused on representing clients in various criminal, civil and administrative matters.” Previously, he served as a member of the North Carolina House of Representatives for District 51 — elected in 2014. He was defeated for reelection in 2016.

Salmon is a mixed bag. While he has been rated over the years with generally low or moderate scores by very conservative groups, he receives mostly decent scores by outfits like the North Carolina League of Conservation Voters. While he supports Medicaid expansion in NC, he wasn’t sure how he felt about raising the state’s minimum wage. His environmental record is pretty good, but he voted in favor of HB2, a bill that required individuals to use bathrooms according to their biological sex and was the only Democrat to vote in favor of placing stricter regulations on abortion rights in 2015.

I contacted Salmon via Facebook messenger on October 13th to ask him the reasons for his votes on abortion rights and the Bathroom bill. While my message was read, I have yet to receive a response. 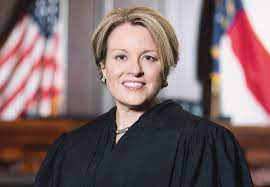 In the candidate questionnaire for Ballotpedia, and among other answers, she said her favorite book was the Bible (no, really): “Of course, it’s not really one book; it is a collection of books, but it is the foundation of our legal system and it provides the best answers and guidance for every issue we confront in life.”

And she listed Antonin Scalia as her judicial hero (no, really): “I try to follow his example in his approach to cases as an originalist and textualist. His opinions are exceptionally well-written and clear.”

But the extreme conservative website The Daily Haymaker called her “Another RINO in a black robe,” so go figure. She’s endorsed by the NC Values Coalition (an anti-abortion advocacy group), Conservative Coalition NC, even the Sierra Club, and by Former Chief Judge Linda McGee, among a host of other former justices of the Supreme Court of North Carolina and judges of the North Carolina Court of Appeals.