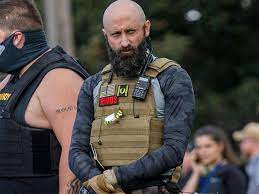 Jeremy Bertino, described as a leader of the North Carolina chapter of the Proud Boys, has pleaded guilty to the most serious charge leveled against any of the rioters on January 6th -- seditious conspiracy to use force to oppose the government of the United States.

And ... uh-oh ... he's cooperating with prosecutors and has agreed to testify against fellow Proud Boys at their trials. "In an unusual admission in court reflecting the importance of what Bertino might say, prosecutors said they might seek leniency at the sentencing and hide Bertino in a federal witness-protection program" (NandO).

Bertino is the 2nd NC Proud Boy to plead guilty. Charles Donohoe of Kernersville, the state Proud Boys president described as another key planner of the group’s role on Jan. 6, has already pleaded guilty to two lesser felonies and likewise promised to cooperate. The 34-year-old former Marine was one of six Proud Boys members named in a May seditious conspiracy indictment.

William Todd Wilson of Newton Grove also has pleaded guilty to the sedition charge. Prosecutors say Wilson is state president of the Oath Keepers, a separate militia group accused of being at the center of the Capitol violence.

Posted by J.W. Williamson at 10/07/2022 07:49:00 AM
Email ThisBlogThis!Share to TwitterShare to FacebookShare to Pinterest
Labels: Jeremy Bertino, Trumpism