1st (Of Many?) Proposed Congressional Maps for NC 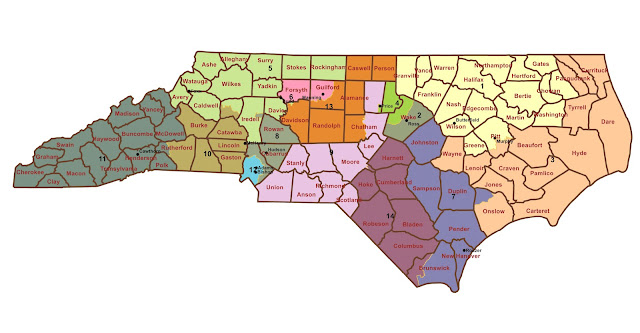 The redistricting experts are divided on which party might capture the 8th and 14th districts.

Bitzer said those two districts in Hall's plan are likeliest to be the most competitive. It's too early to say which way they lean until Hall provides precinct-level data, Bitzer said.

A highly skeptical chorus greeted Hall's trial balloon on his Twitter feed. Among the more provocative responses was one from Vegan Pythagorean:

So you're going to release intentionally inadequate maps to force the court to draw the maps. Then you'll claim a rigged Dem court unfairly put Dems in power and you'll run on that issue to get GOP judges on the court who will allow partisan gerrymandering and your eternal rule.

Posted by J.W. Williamson at 2/16/2022 08:41:00 AM
Email ThisBlogThis!Share to TwitterShare to FacebookShare to Pinterest
Labels: Destin Hall, redistricting

Thomas Mills over at politicsnc.com calls this "A Trolling Map":

The map puts Orange County in the 9th Congressional District which is represented by Mecklenburg Republican Dan Bishop. It winds about 125 miles through rural North Carolina and ends up in Union County and the suburbs of Charlotte. Orange County and Union County have little in common economically, culturally, or socially. I suspect the point is to have liberal Orange County represented by one of Congress’s most openly and proudly bigoted members. It’s little more than trolling. I don’t think it will fly.

The map also forces Madison Cawthorn to rethink his decision to file in the 10th Congressional District. In the new map, he would face fellow incumbent Patrick McHenry. If the map stays, I suspect he will refile in the 11th, which would be more solidly Republican. House Speaker Tim Moore still doesn’t have a district. ...

Another juicy tidbit: The Destin Hall map double-bunks Patrick McHenry and Madison Cawthorn, at least if Cawthorn keeps to his plan to move his stage act east. Much speculation that if this map prevails, Cawthorn will stick with the 11th District.

Additional incentive for Cawthorn to go back to his original district: He'll no longer have Watauga to deal with.