Hillary Clinton Gets Her Revenge on Trump in a Novel 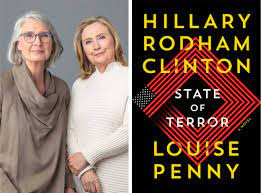 I just read the totally engrossing political thriller, State of Terror. On the dustjacket Hillary Clinton is listed first, as co-author with Louise Penny (who's a much more famous writer of mystery fiction and a Canadian). Considering the insider knowledge about the US State Department, the White House, and the previous inhabitant of the White House, I'd say Hillary Clinton's top billing as the author of this truly thrilling page-turner is well earned.

Whether Clinton's inside knowledge of international diplomacy, including trips to the "dark web," also accounts for the actual writing, which is clean, efficient, beautifully paced prose -- that's another question entirely. I've never read "It Takes a Village" or anything else with Clinton's name on it, so I can't attribute the style to her. I have read some Louise Penny. I suspect she did the bulk of the word-smithing because she's much more the professional in the genre.

Whatever. It's the plotting that's all Hillary. The main character, the heroine, happens to be an elegant middle-aged blond who's just been appointed the US Secretary of State by a president she doesn't even respect and whose candidacy she had publicly opposed. She's odd-woman-out in a White House where the prez holds an actual grudge against her and is apparently bent on ruining her out of spite and revenge. (This SecState had previously risen as some kind of media baroness -- TV, print, the works -- achieving international fame with a documentary exposing the true dealings of a Pakistani nuclear-physicist, Bashir Shah, secretly one of the biggest black market arms dealers in the world.) The whole plot of State of Terror revolves around three nuclear dirty bombs which Bashir Shah has supplied to Al Qaeda, with the help of the Russian mafia and the complicity of Russian President Ivanov, who's (natch!) a dead-ringer for President Putin, including that stunt of riding a horse bare-chested. See, these three nuclear devices have been planted in three American cities, set to go off at a day and time certain. The race is against mass casualties at the very least if not the destruction of American democracy. Believe me, it's all delicious.

I took particular delight in Clinton & Penny's ex-president Eric Dunn, a bitter one-termer who now lives in Florida on a vast estate ("a monument to overcompensation"), golfs a lot, and continues to rally reactionaries by decrying "fake news" and to meddle in US foreign relations to the detriment of national security. In Chapter 34, SecState Ellen Adams describes the ex-president with some indelible hindsight:

The world ended for Eric Dunn, Ellen suspected, where his own property ended. Nothing mattered beyond his sphere of influence....

He was large. Immense in fact. Ellen had met him many times, though only in passing at social events. She'd found him amusing, charming even. Though uninterested in others and easily bored when the spotlight shifted to anyone else.

She'd had her media outlets do profiles on Eric Dunn as his empire had grown, then crumbled, then rose again. Each time more audacious. More bloated. More fragile.

Like a bubble in the bath, it was ready to burst at any moment and release a stink.

And then unexpectedly, he'd turned to politics and won the highest office in the land. But not, she knew, without help from people and foreign governments who planned to profit from it. And had....

...There was no denying the force of this man. Ellen had never experienced anyone, anything, like it.

Most successful politicians had charisma. But this went way beyond that. To be in his orbit was to experience something extraordinary. There was a pull, a promise of excitement. Of danger. Like juggling grenades.

It was exhilarating. And terrifying. Even she could feel it.

Ellen Adams was in no way attracted to this; in fact, she was repulsed. But she had to admit that Eric Dunn possessed a powerful magnetism and animal instinct. He had a genius for finding people's weaknesses. For bending them to his will. And if they didn't bend, he would break them.

He was dreadful and dangerous.

That's some efficient sketching of character, of one who actually plays a pivotal role in the plot -- based on a real-life person who'll never be caught reading this novel.

The writing is never less than competent, utilitarian, always forward-plunging, sparking both fits of humor along with the surprise jolts of terror, and what else could I require from my escapist lit? Plus I come up on passages of political insight that cause me to pause, go back, and read again:

"While you were looking outward, scanning the horizon for threats," [the chief villain, the nuclear-bomb merchant] continued, "you missed what was happening in your own backyard. What was taking root right here, on American soil. In your towns, your shops, in your heartland. Among your friends, in your families. The sensible conservatives moving to the right. The right moving far right. The far right becoming alt-right. Becoming, in their rage and frustration, radicalized thanks to an internet filled with crazy theories, false 'facts,' and smug politicians allowed to spew lies."

That piece of observation comes from the mouth of a foreign terrorist who wants devoutly to destroy the United States and realizes ruefully that others are beating him to it.

Well, if this book actually sells, unlike Clinton's other books, she can use the money for some attorneys.

I believe all her books have been best sellers. And you're a little behind the times, Anonymous. It's Trump who's spending big money on lawyers.

That is, if Durham lives that long.