Whatever happened to Abbie Hoffman?

You know Abbie -- '60s counter-culture celebrity, founder of the Yippies, self-described "action freak and anti-intellectual," jester to the American apocalypse, notorious for smoking dope when and where he shouldn't, and topping it all, he starred as the standout defendant in the trial of the Chicago 7 (particularly celebrated for his uncanny talent for giving a judge also named Hoffman the everlasting purple-faced shakes). Kurt Vonnegut called Abbie "a holy clown." He mobilized thousands -- probably millions -- of anonymous kids by teaching them how to challenge the power structure as a nobody. He also went underground for six years to avoid arrest, had plastic surgery to change his appearance (it didn't work), and yet even then, he couldn't stop himself from stirring the pot. Under the name Barry Freed, he organized Save The River in far upstate New York to stop the Army Corps of Engineers' plan for winter navigation on the St. Lawrence River.

My friend who gives me interesting books that I never got around to reading decades ago in my actual youth when they were published -- he gave me Abbie Hoffman's autobiography. Abbie wrote it while he was hiding out from the authorities, between 1974 and 1980, and published it in 1980 under the title "Soon To Be a Major Motion Picture" (and BTW, why has there never been a movie biography of him? He deserves it as much as Che). The book was subsequently issued under the more mundane title, "The Autobiography of Abbie Hoffman."

What happened to him, you ask? I think he died of a broken heart.

As I started reading "Soon To Be a Major Motion Picture," I was skeptical. How well could this particular celebrity organize a self-examination and execute it with serviceable prose? But I was pleasantly surprised. In fact, I became engrossed for the entire 300 pages. Not only did Abbie write well, with wit and insight and a disarming honesty, but he also had a sort of cinematic instinct for painting a scene quickly and indelibly. I was reminded once again that it takes real smarts to play the clown. Abbie could write one-liners that opened universes of thought:

I recognized I had an ability to make outrage contagious.

The put-on allows you to circumvent the trap.

Nostalgia is a mild form of depression.

When decorum becomes repression, the only dignity free men have is to speak out.

Free speech is the right to shout theater in a crowded fire.

When it comes time to clear away the dishes, only cowards stay seated at the table. 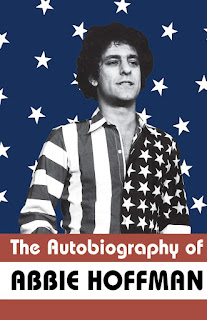 He never sold out. He never bent the knee to The Man, never joined the system and made lots of money, like Rubin the stockbroker and Hayden the upstanding young legislator. Abbie always lived on the economic edge. He could have cashed in. He got numerous offers to go the actor route, build a brand name, monetize protest as theater. He refused. He never stopped making speeches, leading protests, visiting college campuses (like AppState, which he did)-- until he went underground.

Never sold out, but did get depressed. The failed presidency of Jimmy Carter and the election of Ronald Reagan in 1980 got a lot of people depressed. By the time his autobiography was published, Abbie's noggin was going full bipolar, and he experienced wild periods of dissociation from the people who loved him, alternating between manic and immobilized spells. At one point he checked himself into a psychiatric facility under an assumed name. Finally, in 1989 he took 150 phenobarbital tablets and chased it with booze, ending what had been a flashdance of creative disturbance.

He called himself an anarchist, but he was actually always practicing a sly psychology:

I tried never to play on the audience's guilt, and instead appealed to feelings of liberation, a sense of comradeship, and a call to make history. I played all authority as if it were a deranged lumbering bull and I the daring matador. Well versed on the legal limits, I'd plant the sharpest banderillas I could dream up, reaching straight over the horns. I got nicked and whacked a jolly-good number of times but if you saw me, you would have said, There goes someone who loves his work. Impulsive and outrageous, the message was disruption.

But you can see disillusionment growing in him in the last 50 pages:

Fashions were changing. The "New Nostalgia" was in the air. In the introduction to the paperback edition of Woodstock Nation, I wrote (disparagingly) about the fifties revival, the self-analysis, the new religious fervor, body drugs like smack and Quaaludes (which helped you escape it all -- as opposed to the effect of mind drugs), and the absorption of the counterculture into the mainstream. Any call to idealism was greeted with choruses of "We've heard all that," and in a way I had too.

In a chapter titled ominously "Bummed Out on the Movement," Abbie spilled beans about the inherent sexism in a lot of hippie males and the dents they suffered in collisions with the new woman's lib; the neuroses of many a hanger-on who was using the anti-war crusade to work out personal problems; and the fracturing of unity between those who wanted to do bombs and those who wanted to do street theater. Abbie was always a pacifist.

I was still in the movement, but my heart was no longer in the fight. No matter what I did, someone bitched. Nothing I said came out right.

Abbie ended the autobiography with what purports to be a lengthy "confession" of sins. It begins:

Maybe I was wrong.

You know, I'm really sorry and I wanna come home. I love the flag. Blue for truth. White for right. Red for blood our boys shed in war....

...I realize I can't repair all the damage to our system I feel responsible for, but I'm willing to roll up my sleeves and give it a try. It's a damp underground.

Now can I come back?

Yes, the whole apparent show of penance is another put-on, at times hilariously so, but it's saturated with a palpable defeat, a consuming melancholy with the knowledge that you can kick a giant machine but the machine is gonna kick back harder. Sometimes things do get worse.

Abbie did come back from self-exile. He turned himself in soon after publishing this book and through a plea deal agreed to a year in prison. He served four months. After he got out, he continued giving speeches and doing some organizing, but the spirit had evaporated. It was the "Me Decade" now, and Abbie wouldn't last.

In the Future, We'll All Be Abbie Hoffman

I wasn't by any stretch a rep for the "counter-culture" in the '60s. I was straight as an arrow, trying to join the establishment as some sort of scholar/teacher of culture and history, but I was also draft-age and imbued as anyone with impulses for self-preservation, so I was "anti-war" and became an activist, though within the very political structures that Abbie was trying to demolish -- working inside the Democratic Party at the time, attending my first precinct meeting (of a legion still stretching to an unseen horizon) as a Gene McCarthy delegate. I dropped a seminar on Faulkner so I could volunteer full time for the McCarthy campaign, grew bitter when he lost but kept a toe in partisan political organizing, still believing that positive change was possible through the political process. Don't laugh. Abbie himself referred to the Gene McCarthy campaign as "a crusade of virtuous irrelevance." Ouch.

I didn't believe it at the time. But look where we've landed since 2016. The beast wants blood and is getting it, and I am sometimes at the threshold of a door that does on strange geometrical hinges. I feel for Abbie. I feel for all of us.

Other than a cameo in Oliver Stone's "Born on the Fourth of July," Abbie had never been a character in any movie on the period -- let alone the center of his own story -- until Aaron Sorkin cast Sasha Baron Cohen to play Abbie in "The Trial of the Chicago 7." Cohen pretty much stole that movie from Eddie Redmayne, who played Abbie's nemesis Tom Hayden. Hayden was guilty in Abbie's eyes of being "absolutely without humor." According to Abbie, Hayden liked to stir things up and then take a quick exit before any shit hit the fan. In Chicago, Hayden didn't make his exit quick enough.

I think Sorkin's script captured both Abbie's talent for satire and his underlying whip-smart intelligence, his successful one-upmanship with Judge Hoffman, his actual maturity when compared to the arrested development of Jerry Rubin.

It's a pretty damn good movie.

Posted by J.W. Williamson at 2/19/2022 11:51:00 AM
Email ThisBlogThis!Share to TwitterShare to FacebookShare to Pinterest
Labels: Abbie Hoffman, movies, revolution in the U.S.