Another North Carolinian Arrested for His Part in Insurrection 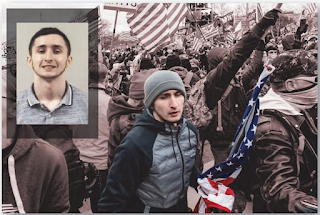 Matthew Beddingfield, 21, was arrested yesterday in Smithfield, charged with multiple crimes, including the felony count of assaulting, resisting, or impeding officers using a dangerous weapon or inflicting bodily injury. Beddingfield is the 18th North Carolinian charged for the January 6th insurrection on Capitol Hill.
"According to an FBI affidavit filed in his case, Beddingfield jumped a barricade and attacked police at least three times on Jan. 6, 2021. In the first assault, he used the flagpole of an American flag he carried to jab at officers. In the others, which were caught on camera both inside and outside of the Capitol, Beddingfield appears to be throwing a metal rod at police, the affidavit shows.
"These offenses allegedly occurred while he was freed on bond for a first-degree attempted murder charge in Johnston County. Beddingfield was arrested Dec. 14, 2019, in connection with a shooting outside a Walmart in Smithfield, according to the Johnston County Report. In August 2021, he pleaded guilty to the lesser charge of assault with a deadly weapon and received probation, NBC reported" (News & Observer).

Beddingfield was present at the Capitol with his father, but his father has not been charged with a crime.
Posted by J.W. Williamson at 2/09/2022 12:34:00 PM
Email ThisBlogThis!Share to TwitterShare to FacebookShare to Pinterest
Labels: Trumpism