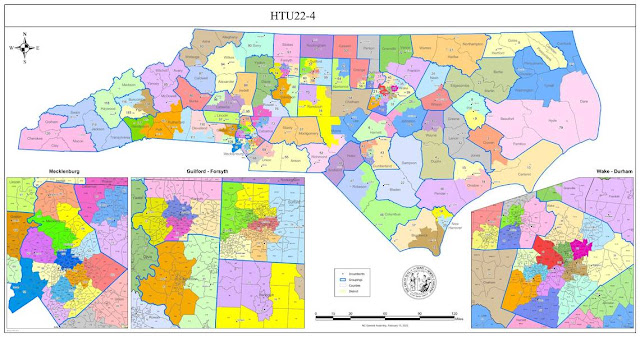 The NC House overwhelmingly passed (115-5) this new map for its own House districts after six Democratic amendments were adopted last night. It's likely to stand as the final version once the Senate votes on it.
The new districts, while expected to produce a Republican majority, would make it more difficult for the GOP to achieve a supermajority or 72 seats in the House.
“I will reemphasize nobody came out of this happy,” said Rep. Robert Reives of Chatham County, the Democratic leader. “Nobody came out of this jumping for joy and figuring, ‘we won, we won.’ What we were happy about was that we came to an agreement that both of us could live with.”

Most of Watauga remains in the 93rd House Dist. but loses two precincts (Blue Ridge and Elk) to Caldwell's 87th. Allegheny County has been added to Watauga and Ashe.
Posted by J.W. Williamson at 2/17/2022 08:50:00 AM
Email ThisBlogThis!Share to TwitterShare to FacebookShare to Pinterest
Labels: redistricting

"Based on 2020 election results, that map could produce a tie in the House between Republicans and Democrats, according to political scientist Michael Bitzer, who pushed out an initial analysis on the proposed map Thursday morning."

Steve Harrison tweeted: "Senate redistricting committee just voted on party lines for what appears to be the final Congressional map [the map pictured above]. It's being called a 6-4-4 map. In a wave year (as 2022 could be) it's conceivable the GOP could win 11 of the 14 seats. Biden won District 1 by 6.2 points."

Asher Hildebrand: "Another way to think about the partisan fairness of the congressional map the NC Senate will be considering [and voted on, passing it on a strictly partisan vote]: if Rs won 54% of the statewide vote, they'd win 10/14 seats. If Ds won 54%, they'd win only 7/14. Impt to focus not just on overall R/D ratio, but also on responsiveness."

Brian Murphy: "Map was released about 30 minutes [before the Senate redistricting committee voted] and lawmakers didn't have paper copies of it or accompanying stats."

Lekha Shupek: "National figures are going to focus on the horse race aspects of this map - who gets how many seats in the mid-terms. That's important but what's more important to most NCians is how this map splits up their communities in exactly the ways they said they didn't want.

"This map splits the three cities of the Triad - Greensboro, High Point, and Winston-Salem - into three different districts pairing them with much more rural areas in direct contradiction of what the vast majority of people from that area asked for.

"The five counties of the Sandhills - Cumberland, Moore, Robeson, Hoke, and Scotland - are split into two districts, and most crucially Cumberland, which contains the regions largest city, Fayetteville, is split from the other counties. Fort Bragg is also cut in half."

Thomas Mills: "Redistricting is an inherently messy process. This map isn’t perfect. In a bad year Democrats, they could end up at 10-4 or even 11-3, but in a good year, they could end up with an 8-6 advantage. Regardless, there are a bunch of competitive seats."

Lekha Shupeck: "When Republicans tell you this map passes the court mandated metrics, [remember that] they've lied to you about anything and everything during the process before"

Lekha Shupeck: "Also, Charlotte is being split completely in half to make a district that I assume is too competitive for Madison Cawthorne but good enough for Tim Moore to run in."

Frank Eaton: "Roy Cooper is a Democratic unicorn. Defining toss-up districts by Trump-Cooper splits in 2020 is not a good metric for generic Democratic performance. I am adding +4 R to these 'swings.' "

Lee Franklin: "For the love of god, THERE IS NO REASON TO SPLIT GUILFORD COUNTY."

Marc E. Elias: "This is just another failing effort by the GOP to illegally gerrymander North Carolina. I am very certain it will not be the adopted map."

Jose Manrique tweeted how Trump did in the 2020 elections in the four new US House districts that are now considered "toss-ups":

Steve Harrison: "The new 14th district is a toss-up. It will presumably attract some top-notch Democratic candidates. Would @ChazBeasley @McCreadyForNC @JeffJacksonNC decide to run here? A potential general election matchup against @CawthornforNC would be epic."