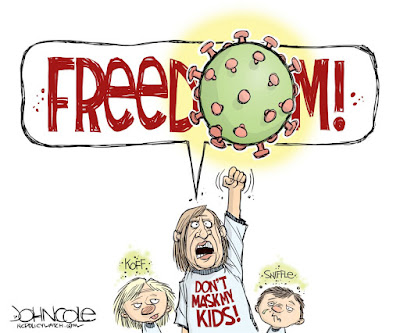 One big difference: Whereas the men who rushed the rostrum in Watauga got to stay and dole out their paper accusations to the school board members, the man who "broke the barrier" in Winston-Salem found his face on the floor in a scuffle with security.

On the surface, the commotion was all about mask mandates in public schools (but hold on for the rest of the story):

The tone and tenor of the comments took an unusual, and ultimately disruptive turn, when two speakers, first, Regina Garner and then Deborah Tuttle, began reading from a script that attempted to make a case that the school board has failed to uphold the state and federal constitutions by enforcing a mandate, in this case a mask mandate.

Among other issues, they falsely accused the school board of practicing medicine without a license, committing child abuse because of masking and violating the state’s obscenity law by keeping in school libraries materials “with obscene and inappropriate images.”

Tuttle told the school board that unless these violations were corrected in 72 hours, the school board would be receiving letters of intent to file a claim against the school district’s insurance carrier, Liberty Mutual.

The scene was straight from the playbook of Bonds for the Win, a group that is urging parents and far-right activists to serve claims against school districts, claiming they have broken laws. Bonds for the Win has a website that includes scripts on how to file claims in several states, including North Carolina.

You noticed the demand slipped in there -- right? -- that certain books must be removed or censored from school libraries, which is becoming much more the marquee issue among these disruptors as masking mandates are lifted. The ultimatum that the school board must comply with demands within 72 hours is a curious echo of what was demanded of Watauga board members.

It's a movement, all right, the natural evolution of bullying Trumpism.

Posted by J.W. Williamson at 2/24/2022 08:53:00 AM
Email ThisBlogThis!Share to TwitterShare to FacebookShare to Pinterest
Labels: Forsyth County Board of Education, public education, Trumpism, Watauga County schools