When Good News Is Bad News 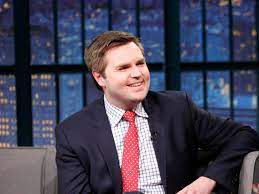 Since I have a particular grudge against J.D. Vance, author of Hillbilly Elegy, who's also running for the US Senate in Ohio, I'm encouraged by news that his candidacy appears to be sucking wind. He was a Trump critic who remade himself as a Peter Thiel avatar masquerading as a Trump toady, and it ain't working.

The reason it ain't working (the bad news) involves the continuing death-grip Trump has on Republican voters: “Driving [Vance's] negatives is the perception that he is anti-Trump" (Politico). Imagine that. As a Republican politician, you may not utter a peep of criticism about the man whose management of the presidency continues to make appalling headlines more than a year after he left office: "Trump Illegally Ripped Up Hundreds of White House Documents And Many Went in Burn Bags."

It's maybe not so much the Trump endorsement that sways large swaths of Republican voters; it's maybe quotable evidence that you ever said a negative thing about him (like Vance once did, in spades). Maybe that explains why the Trump-endorsed Ted Budd in the North Carolina Senate race hasn't yet put away a paper-tiger like Pat McCrory, who was not endorsed by Trump but who has assiduously avoided being quoted attacking the former president. 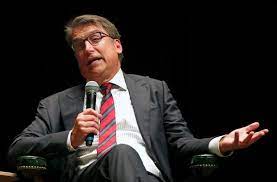 Look at the continuing trouble Nikki Haley blunders into simply because she allows her bad thoughts to get written down and published: "We need to acknowledge he [Trump] let us down," she told Politico magazine. "He went down a path he shouldn't have, and we shouldn't have followed him, and we shouldn't have listened to him. And we can't let that ever happen again." Which is why Nikki Haley will never win another Republican primary, and Pat McCrory might.

Mild sauce usually doesn't cut it anymore for Republican politicians (which is why Vance tried to remold himself, not as a pudgy wonk any longer but a slimmed down assassin of "socialism" who wants to "own the Libs" more than he wants to be an intellectual Libertarian, which he is). Wouldn't it be FUN-nee if Pat McCrory proved there's a winning upside to pouring milk on your toast?

Posted by J.W. Williamson at 2/08/2022 10:47:00 AM
Email ThisBlogThis!Share to TwitterShare to FacebookShare to Pinterest
Labels: J.D.Vance, Pat McCrory, Trumpism