New Hope in the US House: Ben McAdams from Utah


I lived in Salt Lake City for four years and first got involved in Democratic Party organizing there, canvassing door-to-door for Eugene McCarthy during his 1968 insurgency against President Lyndon Johnson. I was bit by the bug and never recovered.

So I'm interested in that solidly red state, especially when it shows some blue cracks, which usually open up around the capitol city. The 4th Congressional District stretches south of Salt Lake City through prosperous suburbs but also takes in some deeply conservative enclaves. 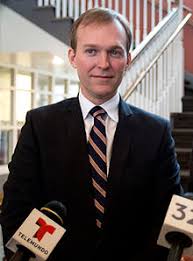 As of yesterday, Democrat Ben McAdams is leading incumbent Republican Mia Love by 4,906 votes, with roughly 55,000 mail-in and provisional ballots still left to be counted in Salt Lake County and 72,000 ballots in Utah County (though some -- many? -- of those ballots actually belong to other congressional districts).

The race still hasn't been called.

Ben McAdams is a lawyer who served in the state senate before becoming mayor of Salt Lake County in 2013. He's a Mormon and a moderate, which means he may sometimes be a no vote on abortion rights (though he voted against a state law which would allow medical personnel to refuse to perform abortions on moral grounds and he voted against extending the waiting period for an abortion, so his record is mixed on that subject).

McAdams supports same-sex marriage. After the Supreme Court ruled in Obergefell v. Hodges that same-sex couples have the right to marry in the United States, McAdams said, "This decision enshrines what I’ve long believed — that all families should be treated equally under the law."

He's on record opposing the repeal of the Affordable Care Act and has also called on Congress to renew the Children’s Health Insurance Program (CHIP) after its funding lapsed in September 2017. For a Utah Democrat, he bravely opposed the Tax Cuts and Jobs Act of 2017, citing the expected $1.5 trillion increase of the national debt over 10 years. He said it clearly favored the "wealthy over the middle class."

Incumbent Republican Mia Love was until Tuesday at least a rising star in the national Republican Party. As an aspiring Utah politician (she had converted to the Mormon church), she was given a prominent speaking slot at the 2012 Republican National Convention, and then she ran for and won the 4th District in 2014, becoming the first black woman Republican in Congress. She was reelected in 2016 while keeping her distance from Donald Trump, who's toxic among some Utah Mormons.

Love ran a relentlessly negative campaign against Ben McAdams, but screaming "liberal liberal liberal" over and over has ceased to work with an educated electorate. And DJT dissed her very publicly on Wednesday, saying he'd never gotten any love from Mia Love, so good riddance to her.

They are still counting in Utah. Hope he wins.

He won! Man has some real accomplishments to his credit. He will be a welcome add to the Dem House majority. Did you read the article about him spending 3 days and 2 nights as a homeless person in Salt Lake City to get a first hand anonymous look at shelter conditions/areas needing improvement? Very real guy.