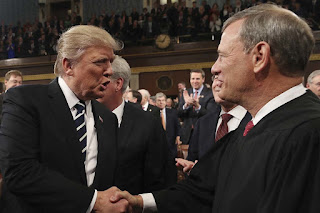 That scares the living cornbread stuffing outta me.

Has John Roberts met Brett Kavanaugh yet, and is he saying that ole Brett is not a "Trump judge." Was he sober at the time?

Has John Roberts met any of the other Trump appointees that Mitch McConnell is trying to rush through to populate the judiciary, those solemn legal minds that Twitterman chose because he thinks they'll approve of whatever he gets it in his head to do?

John Roberts is our hedge against the vandals?

Maybe. But there's another Defense Against the Dark Arts ... the next election cycle, when we can complete what we have begun.

Posted by J.W. Williamson at 11/22/2018 10:17:00 AM
Email ThisBlogThis!Share to TwitterShare to FacebookShare to Pinterest
Labels: Donald Trump, John Roberts