Coach Jerry Moore Gets Used by the Watauga GOP 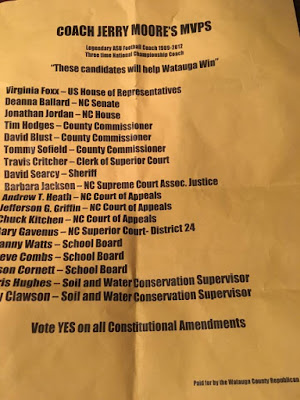 At the Election Eve prayer meeting on the Watauga County courthouse steps last Monday night (they streamed it live), Republican faithful were urged to supply themselves with the yellow flyers advertising "Coach Jerry Moore's MVPs," an obvious counter-attack on "Pam'sPicks," a decades-old election year endorsement by a local progressive warrior that I happen to know very well.

"PamsPicks" is well known and closely attended to by people in and out of Watauga County and has attained a certain local fame.

The Republicans needed a celebrity name to attach to an "endorsement" of their candidates, and someone apparently thought, "I know! Legendary ASU football coach Jerry Moore ... that's the answer! The students will swoon!"

But someone's enthusiasm for a bright idea got ahead of their performance of that idea. No one bothered to ask Coach Moore for his permission.

So they produced their flyers ... actually several versions of their flyer. There's the one pictured here, and there's a better designed one with Coach Moore's photograph that's reprinted with the AsheCountyLine article, but on election day, there were other versions circulating that had no "Paid For By ____" disclaimer on them, which is required by North Carolina state election law and which caused the complaints that alerted Coach Moore that his name was being tossed around as the celebrity supporter of the entire Republican ticket, including all six constitutional amendments.

There's sloppiness ... and then there's the Watauga County Republican Party.