Finally! Something Trump's Good At: Blaming the Victims 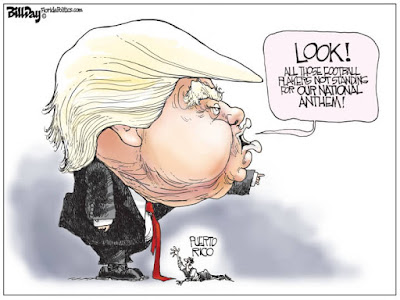 The most important thing to Trump -- other than getting to one of his golf courses as fast as possible -- is that the victims of a hurricane praise him. The thing he can't forgive or forget is criticism of any kind, and the thing that will send him into a Twitter rage is criticism from a woman.

So the mayor of San Juan, Puerto Rico, criticized the government's slow and inept response to Hurricane Maria. She also said, “I am begging, begging anyone who can hear us to save us from dying.” She didn't mention Trump by name, but he took it personally. Because that's what you do when you're a thin-skinned narcissist.

Last weekend, Trump tweeted 22 different times about his newest cultural enemy, black athletes in the National Football League. He tweeted nary a single time last weekend about the devastation in Puerto Rico. Black athletes aren't good citizens in his eyes. Puerto Ricans aren't even citizens at all to him.

He attacked the mayor this morning at 7:26 a.m. -- "Such poor leadership ability by the Mayor of San Juan, and others in Puerto Rico" -- but already days ago he had begun to blame the victims of Maria:


Texas & Florida are doing great but Puerto Rico, which was already suffering from broken infrastructure & massive debt, is in deep trouble .... It's old electrical grid, which was in terrible shape, was devastated. Much of the Island was destroyed, with billions of dollars ... owed to Wall Street and the banks which, sadly, must be dealt with.

Those were tweets from last Monday. Texas and Florida, both states that voted for him last November, "are doing great." But Puerto Rico is a loser island full of loser people whose debt makes them really unworthy of help. Isn't that the gist of those tweets?

Trump sees the world through a pig's eyes. He's gotten his because he deserved it all. Everybody gets what they deserve, no? So the iron logic of victim-blaming means to Trump that Puerto Rico got what it deserved too.

Posted by J.W. Williamson at 9/30/2017 10:51:00 AM
Email ThisBlogThis!Share to TwitterShare to FacebookShare to Pinterest
Labels: Donald Trump, Puerto Rico

A billionaire is sitting in his golf club right now attacking dying people for needing his help. Jesus H. Christ.

A billionaire who left the people of Puerto Rico holding the bag for $33-million for his bankrupt golf course there....part of the debt for which he's blaming them.