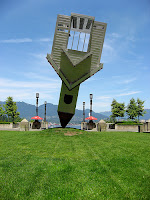 If a Democrat can flip an Oklahoma state House district that went to Trump last fall by 10 points, then just about anything can happen. Okla-frickin'-homa.

On Tuesday, in a special Oklahoma House race to replace a Republican who resigned to take a better job, school teacher Jacob Rosecrants beat some Republican businessman by more than double the margin that Trump won over Hillary in the same district last fall. Rosecrants buried his Republican opponent by 21 points.

Holy crap. Oklahoma. Where the wind comes whistling down the plain.

Also on Tuesday, another formerly Republican safe seat in New Hampshire flipped Democrat in another special election, in a district that went to Trump last fall by 16 points.

Posted by J.W. Williamson at 9/14/2017 09:33:00 AM
Email ThisBlogThis!Share to TwitterShare to FacebookShare to Pinterest
Labels: Donald Trump, New Hampshire, Oklahoma