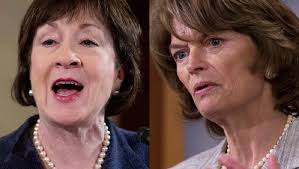 1. Can Lisa Murkowski and Susan Collins be bribed? Those two Republican senators have said they needed to see how the Graham-Cassidy health care bill would affect their states. Presto! Graham and Cassidy got to work over the weekend and rewrote their bill to give more money to Alaska and Maine. They're rolling out the new version of the bill this morning ... which, just incidentally, the Congressional Budget Office will never be able to "score" before the end of the week. Question: If the latest Republican "fix" for Obamacare is so great, why would it take bribery to get it passed?

4. Trump loves those self-inflicted wounds. The backlash against Trump's outburst against the National Football League for condoning protest has drawn its own high-powered backlash. Many team owners -- all or most of them million-dollar donors to Trump -- have condemned the comments and either symbolically or literally linked arms with their players. Meanwhile, a Trump lickspittle group started running Facebook ads urging Trump supporters to turn off NFL games on TV. Good luck with that project.