Been reading coverage of Trump's big rally in Huntsville last night in support of Luther Strange, including in the Huntsville Times.

"I'm for Luther, but I might have made a mistake"
Trump talked out his ambivalence about supporting Strange in front of several thousand (possibly confused) Trump fans (but not necessarily Luther Strange fans).

“I might have made a mistake. I’ll be honest, I might have made a mistake,” Trump said about his early decision to back Strange. So, as if acting on his regret, he brought Strange's lethal opponent Roy Moore into the equation: “And, by the way, both good men. Both good men. If his opponent wins, I’m going to be here campaigning like hell for him. But, I have to say this … Luther will definitely win.”

Strange had taken the stage just before Trump and proudly put on a red “Make America Great Again” hat. “Are you ready to support our president tonight?” Strange asked of a crowd that was supposedly there to support his candidacy for the Senate. From the stands, a young Trump supporter shouted back: “You suck!”

Strange spoke for fewer than four minutes at his own rally. Trump spoke -- if you could call his disconnected word-salad a "speech" -- for over 90 minutes. People in the upper stands were seen beginning to leave after the hour mark. Trump noticed too and suggested that people were just headed to the restrooms.

"You should be very afraid, but also, you're perfectly safe" 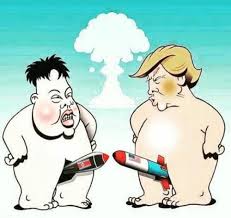 In Alabama, they love saber-rattling (political cod-pieces). And Trump loves a pissing match, so the following prompted the loudest cheers of the night:

“We can’t have madmen out there, shooting rockets all over the place. And by the way: Rocketman should have been handled a long time ago. [Bill Clinton's fault. Barack Obama's fault.] This shouldn’t be handled now, but I’m going to handle it, because we have to handle it. Little rocketman.”

He then ominously warned that North Korea could explode a “massive weapon” over the Pacific Ocean, resulting in “tremendous, tremendous calamity where the plume goes.” Then he told everyone not to worry about that.

By the great big solid dome of his towering ego?

A few other hard-rock gems
When Trump rambles, he bumps into all sorts of furniture. "How about a thing called your Second Amendment,” the president said. “Right? Okay, remember that? If Crooked Hillary got elected, you would not have a Second Amendment, believe me. You’d be handing in your rifles. You’d be saying: ‘Here, here they are.’ ” Who knew that a president had that kind of power? Apparently, ending the Second Amendment for Hillary would have been as easy as ignoring centuries of precedent invested in the emoluments clause.

While trying to praise Strange once again, Trump drew a contrast between Strange and several other Republican lawmakers he had lobbied to support RepealAndReplace. Trump said the other Republican congressmen would consider voting for the legislation only if the president had dinner with their various relatives. “Pictures all night, everything,” Trump said. “Brutal. Brutal. You know what that is, folks, right? It’s called brutality.” Trump talks about his erstwhile political allies that way. Pretty soon he won't have political allies.

Trump got the rally crowd to boo McCain. Twice. And chant "Lock her up!" repeatedly. It's called uniting the country.

“Believe me, folks,” he said. “The wall is happening.” Only now apparently, it's going to be a see-through wall to prevent people on our side from being killed when the drug traffickers catapult 100-lb. bags of narcotics over that wall.

And having entered the domain now of Mad Magazine, I leave you with the chief executive about which you can feel so proud, and bid you adieu.