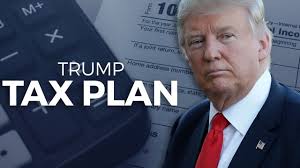 Trump unveiled his tax overhaul plan yesterday in Indiana. It has big benefits for corporations and the very wealthy. Because there is little substance yet in the 9-page master outline (the press got a one-page summary), the bottom line for the middle class is unknown and may be modest. It will definitely add substantially to the national debt, over $2 trillion by the estimates I've seen this a.m. (Republican cheerleaders claim the deficit doesn't matter: see below).

During the rollout, Trump said, “Our framework includes our explicit commitment that tax reform will protect low-income and middle-income households. Not the wealthy and well-connected. They can call me all they want; I’m doing the right thing.” He then added: “And it’s not good for me, believe me.”

Said the man who's afraid to release his tax returns.

This guy Trump. Look at just one gigantic lie: "They [the very wealthy] can call me all they want" -- presumably to complain about how hard this tax plan will be on them -- "I'm doing the right thing." Bro, they don't need to call you; they'll see you at Mar-a-Lago.

Huge addition to the national debt. Just like that, the fiscally conservative Republican Party goes to turning tricks for the wealthy like an Avenue Q street-walker. Was this deficit toxin the trigger that prompted The Drudge Report to headline the Trump tax plan yesterday, “MORE BETRAYAL”? (Don't go looking for the headline now. Headline's been changed. But here's a screen capture of the original.)

The Congressional Budget Office (CBO) forecasts that deficits will total $10.1 trillion over the next 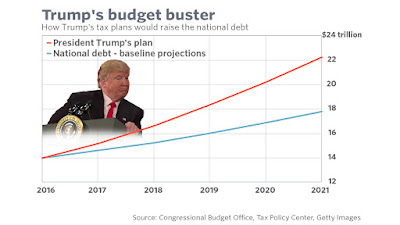 decade (that's in addition to the current $20 trillion deficit). New deficit spending under the Trump Plan is expected to top $1 trillion a year in 2022 and keep growing from there.

Some Congressional Republicans who had until yesterday been deficit hawks jumped into promoting the tax plan. "It'll be great! It'll produce 4% growth as the economy explodes, because really rich people will want to build new factories and hire and hire some more!"

A dubious proposition. The CBO projects that, under current laws and policies, "the economy will grow 2.3 percent this year but growth will average just 1.9 percent a year over the coming decade." Oh, "under current laws"! We're changing that, sez the Trumpian fantasy. With a new law, we're unleashing a flood of economic development that will top out at 4% national growth. Dubious at best, say the economists at The Center for Budget and Policy Priorities.

They're shrugging off the specter of adding trillions to the federal deficit (while meanwhile and incidentally enriching a chief executive and many of his ideological pals. Trump for one has never been shy about conflicts of interest and profiting off the office).