Trump Lays a New Turd in the GOP Punchbowl

Republican leaders in the US Congress were perhaps looking forward to a September when they could get a couple of positive things done, like beginning to relieve Houston, and maybe raise the debt ceiling -- votes likely to be bi-partisan and popular -- but no, Trump has to go and drop DACA on them, saying, "Now, you've got six months to pull my bacon out of the fire."

Majority reaction -- wide and deep offense. Business leaders have risen up against Trump's move, risen up like a king cobra about to strike. Political leaders in both parties hate it, warned Trump against it, now scuff at the dirt. Qualified Hispanic voters who used to regularly vote Republican -- there are some -- are reconsidering their values. Congress will groan under the load while multiple "polls show that DACA enjoys overwhelming support among the public."

(Republicans stand to lose a substantial bloc of voters. Up to 38% percent of Hispanic voters have voted Republican, depending on the place and the candidate. Mitt Romney got 31% of the Hispanic vote. Trump, not.)

It's clear Trump didn't know what he was doing yesterday. By evening he was tweeting -- “Congress now has 6 months to legalize DACA (something the Obama Administration was unable to do). If they can’t, I will revisit the issue!”

I will revisit the issue. I bet you will.

If certain facts and human realities weren't clear to Trump, Sessions knew exactly what he was saying and what it all meant, and he gleamed like a greased pig in those television lights. Was he exulting in his heart? "Fewer brown people will be coming here, or staying. Praise Jesus!"

Why did Trump have to go and do that now? Of all the things that terrify him -- being touched by strange people, being laughed at, being put on the spot publicly and dared to tell the truth -- looking weak is strong juju for Trump men, and some eleven conservative Republican attorneys general had threatened to sue Trump by today if he didn't start to end DACA. (Plus he was on his way to a big public rally of his DACA-hating peeps in North Dakota today.)

The attorney-general-posse is led by Texas Attorney General Ken Paxton, who is under indictment by a Texas grand jury for securities fraud. Paxton was joined by the attorneys general of Arkansas, Alabama, Idaho, Kansas, Louisiana, Nebraska, South Carolina, Tennessee, and West Virginia, as well as Idaho Gov. C. L. Otter, in a June 29 letter to Jeff Sessions urging the White House to start phasing out DACA by Sept. 5, or face a lawsuit.

Jeff Sessions ... the willing stooge Trump sent out yesterday to face the cameras, the man who loves what's happening -- he had reportedly told Trump that he wouldn't defend DACA in court. The Constitution is his shield, he believes says. With Sessions, the law follows the heart, and the white Anglo-Saxon race is very important to Sessions. He's on record praising the 1924 eugenics-based immigration law that enforced racial and ethnic animosity. In a Breitbart radio interview with Steve Bannon in 2015 Sessions made perfectly clear his preference for people who "assimilate" completely, and you can figger all day what that means.

And then comes Irma. 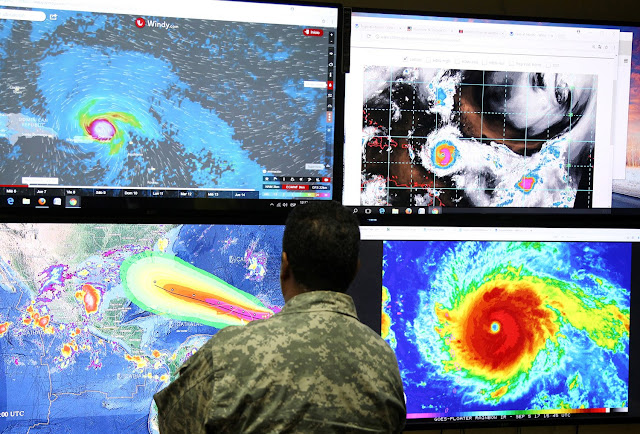 Did you hear about Republican mayor candidate Kim Barnette in Charlotte? Holy shit. She posted on Facebook, “VOTE FOR ME! REPUBLICAN & SMART, WHITE, TRADITIONAL.”

Republican candidates are supposed to be white, but rarely do you see one bragging about it. She's been denounced by Robin Hayes.

What's wrong with being white?

Still waiting for an answer.

No, you just can't answer it.

At least be honest about it.