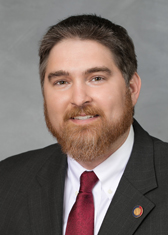 NC House member, Republican Chris Millis of Hampstead, the idiot who tried to start a movement in the General Assembly to impeach and remove Secretary of State Elaine Marshall, has himself fallen in the weeds. He suddenly announced his retirement because -- you guessed it -- he wanted to spend more time with his family. (Totally not making that up.)

His lust for impeaching Secretary Marshall, based on bad and misunderstood information, had earned him nothing but jeers and face-palms from both sides of the aisle in the GA.