The Imperial Stylings of Secretary Price 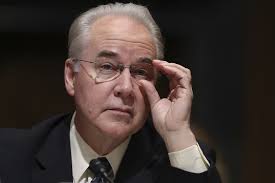 Look, libtards, we know you're going to act all outraged and stuff and start demanding reform, because of Secretary of Health and Human Services Tom Price's spending hundreds of thousands of dollars on private chartered flights, so he doesn't have to rub elbows with common folk in air terminals and -- heaven forbid! -- get seated next to some talkative liberal with opinions for a two-hour flight. So of course he spent hundreds of thousands of our dollars on chartered airplanes just since January.

And his spokeswoman had a legitimate -- totally legitimate! -- excuse. She said he got delayed at an airport once. And he had to sit in a waiting room mainly full of people who didn't know they were supposed to bow to His Grace and who didn't write him big checks back when he was running for the US House from Georgia and who probably couldn't even afford to live in Trump Tower.

And then Secretary Price's imperial spokeswoman, Charmaine Yoest, who doesn't know a thing about irony and wouldn't recognize it if crawled up her leg and snagged her pantyhose, patiently explained to the Complainers: “This is Secretary Price, getting outside of D.C., making sure he is connected with the real American people.”

Because real 'Muricans can and often do spent $17,000 to go 150 miles, on a private chartered plane with a kitchen.

Posted by J.W. Williamson at 9/22/2017 11:42:00 AM
Email ThisBlogThis!Share to TwitterShare to FacebookShare to Pinterest
Labels: Tom Price

A kitchen? Really? does it have a Cuisinart?

You get all huffy about this, which is bad, but nothing about the extravagant trips Michell Obama took.

Don't be a creep, Bro. You can rip me all you want, but it's really jerk-like to come on here and throw mud at Michelle Obama, about whom there has been no hint of scandal. I resent it. For someone who does not take me seriously, you return here over and over and snarl at me and throw stones at others who've done nothing to deserve it -- as though you take me seriously enough to show your ass.

This anonymous troll must be frightened to out himself by posting under his real name. Typical of the blustering right wing.