Will Ignorance Destroy Trump Before His Arrogance Does? 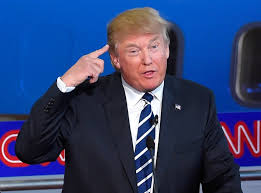 According to White House insiders who talked to reporters, Trump views Attorney General Jeff Sessions and Deputy Attorney General Rod Rosenstein "less as executors of law than as salaried staff."

As "salaried staff," those guys should buckle to the CEO, should jump on command, should do the bidding of the emperor of ice cream before the ice cream melts in the political heat.

That in a nutshell is what's wrong with Trump -- the coupling of towering arrogance with a complete ignorance of how our government works -- that law enforcement is not the handmaiden of a bumptious executive but a check on executive power.

Whoever said that ignorance can't kill?

Posted by J.W. Williamson at 6/17/2017 09:16:00 AM
Email ThisBlogThis!Share to TwitterShare to FacebookShare to Pinterest
Labels: Donald Trump

They are salaried staff.

He may fire them if he wants, nothing illegal or unconstitutional about it.

Apparently, "Anonymous" slept through Watergate and the "Saturday Night Massacre".

Apparently, "Anonymous" slept through Watergate and the "Saturday Night Massacre"

Those have nothing to do with the current situation.

There is no evidence of Trump colluding, conspiring or any other fantasy you have with Russia.

Comey and others have stated Trump is not the subject of an investigation.

Comey deserved to be fired many times over for his acts as Director.

The Senate must confirm some appointments, but nothing says the President has to have anyone's permission to fire them.

JW and the leftist blogosphere are just running gossip sites to stoke up the hate against Trump.

Face it, Trump is President, Hillary lost because she was a bad candidate and an idiot, Podesta is an idiot who let someone into his emails, the DNC killed Bernie's campaign, and the repubs have the majority in both houses of Congress, but they do not control them.

Dream all you want, even if Trump is guilty of breaking any laws it will be a long time before he is impeached.