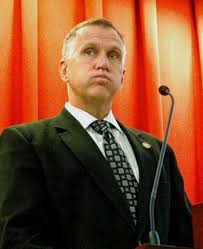 Tillis has not committed to voting against the disaster known as TrumpCare. In fact, according to CNN, Tillis has offered no comments on TrumpCare since Thursday, June 22nd, well before the CBO report. Tillis has also avoided public in-person town hall meetings.

WHAT: Citizen mobilization in reaction to 22 MILLION fewer Americans with healthcare under the Senate’s TrumpCare bill.

WHERE: Outside the office of Sen. Thom Tillis at Federal Courthouse at 310 New Bern Ave., Raleigh, NC. Other events happening Tuesday at Tillis offices in Charlotte and High Point and in Greenville on Wednesday.