Unicorns Making a Comeback: The Environmental Wisdom of DJT 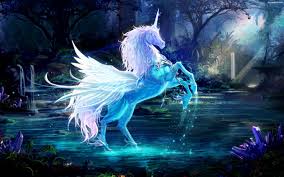 No word yet on the administration's position on the flatness of the earth, the use of leeches as a cure for palsy, or the stoning of virgins to increase crop yield. However, the White House has confirmed that the sun is, in fact, a flaming chariot pulled by three Carpathian boars, and that tornadoes are caused by the wrath of the barley god Kubabanush.

In other news, the U.S. Naval Observatory has re-set the national clock to the year 1017.

(1) It's not economy-versus-environment; that's a false dichotomy, because alternative energy is providing more new jobs than traditional energy;

(2) The Paris Accords were not a business "deal"; they were a general, evolving agreement;

(3) The Accords were incredibly loose and open-ended; there was absolutely no practical gain in pulling out;

(4) The Accords were flawed, but they were a start; pulling out just hurts the momentum and makes a terrible symbolic statement;

(5) This action is a big blow to the U.S. as leading world power; it quickly makes us a marginalized outlier and opens a vacuum for others (including China) to fill;

Don't think Trump said anything about whether or not climate change is real.

Just that is a a bad treaty harmful to Americans and America.

I thought his whole speech was aimed at rallying his loyal supporters. It was emotion-charged, full of exaggerations and scare words, and it went on for quite some time. So maybe he's feeling beleaguered, to he's trying to deflect our attention, again. Or both.

By "exaggerations" do you mean flat out lies?