Trump Learning the Hard Way That Words Have Consequences 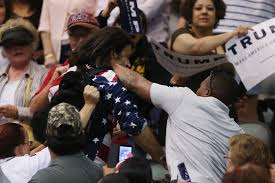 In March 2016, during a campaign rally in Louisville, Ky., Trump exhorted his audience about some protestors: "Get 'em outta here!" Trump repeatedly rasped, and the crowd responded. They punched, kicked, and shoved the protestors.

And the protestors then sued Trump for inciting violence.

According to Aaron Blake, "Trump's attorneys sought to have the case dismissed on free speech grounds, arguing that [Trump] didn't intend for his supporters to use force. But [Federal Judge David J.] Hale noted that speech inciting violence is not protected by the First Amendment and ruled that there is plenty of evidence that the protesters' injuries were a 'direct and proximate result' of Trump's words."

There were worse examples than that Louisville rally. Will there be more lawsuits?