Government Shutdown This Friday Because of Trump's Wall? 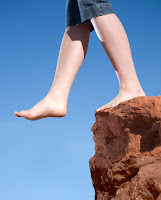 Campaign-speak: "And Mexico will pay for it!"

Reality: We the taxpayers will pay for it, or it won't get built.

Trump to Congress today: "Fund my wall, or I'll shut down the government."

The Unseen Hand: "The First 100 Days," the self-imposed benchmark for presidential success that Trump himself bragged about over and over -- how much he was going to get done immediately. The 100 days deadline is Saturday. Government shutdown is Friday, if temporary funding to run the government isn't voted on.

Shorthand: Trump needs a win by Saturday, something to put in his 1st 100 days plus column, and he seems to have decided that a Congressional appropriation of enough money to lay about a mile of wall footings will give him enough to brag and strut about, so he's demanding it. Members of Congress from both parties, including every Republican who represents real estate abutting the proposed wall, are saying "You've got to be kidding!"

So if there's a government shutdown, it's all on Trump. If he can't sell his snake oil, he'll make everyone suffer.

Posted by J.W. Williamson at 4/24/2017 07:40:00 AM
Email ThisBlogThis!Share to TwitterShare to FacebookShare to Pinterest
Labels: Donald Trump